How did the vampire squid get its terrifying name? Should you worry about these sea creatures the next time you're swimming in the ocean? Learn all about the strange and mysterious cephalopod with these incredible vampire squid facts. 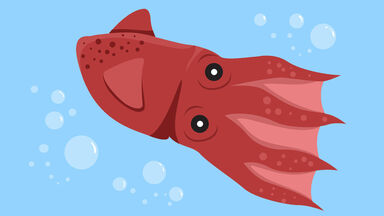 It's Neither a Vampire Nor a Squid

The vampire squid's scientific name is Vampyroteuthis infernalis, which translates from Latin to "vampire squid from Hell." Its name is based on its caped appearance, glowing eyes and red skin. Some vampire squids have jet-black skin, making them look even more like Dracula himself. It first got its name when a member of the 19th century German Deep Sea Expedition, Carl Chun spotted the creature. He observed its appearance and assumed it had risen from the underworld.

It Never Sees the Light of Day

One of the reasons that it takes so long for food to reach the vampire squid is that it lives more than 2,000 feet below sea level. Sunlight can't penetrate the ocean that far down, so the vampire squid lives in the dark for their entire life (another reason for their spooky name).

It Is Made For Extreme Environments

The vampire squid is an extremophile, so it can live in the extremely cold and pressurized environment of the deep ocean minimum zone. That's also why it doesn't change color like a true squid; camouflage doesn't matter in such a dark habitat. It also has large gills to take in as much oxygen as possible. The vampire squid is quite buoyant, similar to a jellyfish, which makes it easy to float in the ocean depths.

The Vampire Squid Is a Living Fossil

The existing vampire squid is nearly identical to fossils found of its ancestors from about 300 million years ago. While there is evidence of other members of the order Vampyromorphida, the vampire squid is the only survivor still in existence.

Unlike its cousin, the giant squid, the vampire squid doesn't grow to be very large. Female vampire squids reach a maximum size of 30 centimeters (around one foot). Males don't even grow that large; like true squids, females are always larger. Large vampire squids usually weigh around one pound.

It Scares Predators By Nearly Turning Inside Out

Because the vampire squid has no ink sacs, it needs to protect itself in other ways. A vampire squid's main method of self-defense is its ability to nearly turn itself inside-out. When threatened, it pulls its cloak over its head to expose rows of cirri — soft spines that look like teeth on the underside of its cloak. This position is often called a "pineapple" posture. Only the tips of its tentacles are exposed, which the squid can regenerate.

It Can Glow in the Dark

Many deep-sea squids have photophores on their bodies, which give them the appearance of glowing in the dark. The vampire squid is no exception. Its bioluminescent lights can scare away predators, but it uses this ability sparingly — light can also attract even bigger fish.

The Vampire Squid Can Shoot Light From Its Tentacles

The vampire squid can also release bioluminescent mucus against a predator if needed. The mucus comes from the tips of its tentacles and glows in the dark for up to 10 minutes, which confuses a potential predator long enough for the squid to get away. It looks a bit like an underwater fireworks show!

Its Eyes Are Proportionally Huge

Like other cephalopods, the vampire squid has two eyes, one on either side of its head. But its eyes are very large compared to the rest of its body — proportionally much bigger than the eyes of other cephalopods, or even other members of the animal kingdom!

It Reproduces More Often Than Other Cephalopods

Most squids and octopuses spawn once in their lives and live only one or two years. After observing dead female vampire squids, however, scientists believe that vampire squids might reproduce dozens of times and live eight times as long. The theory is based on the number of eggs released in the female's lifetime and how many more eggs were left inside her.

It's Nearly Impossible to Find a Vampire Squid

With all this cool information about the vampire squid, you're probably excited to see one in person. But unfortunately, all we have are pictures and videos of vampire squids who have been found injured or dead. They are simply too deep in the ocean for divers to see and observe, and there are no existing zoos or aquariums where you can check them out.

Appearances Can Be Deceiving

Even though the vampire squid may look like a creature "from Hell," it's quite reclusive and harmless. It's a good lesson for the rest of us that many organisms often look much scarier than they actually are. For more examples of animals you don't need to fear, take a look at these bug facts that seem like science fiction (but they're true!) You can also check out 15 unique examples of animal adaptations for other creatures that have changed to survive their environments.