What Does “Winter” Mean? Defining the Coldest Season

For some, winter is a magical wonderland of snowy vistas, knit sweaters, hot cocoa, and the promise of winter holidays. For others, the winter season involves shivering under blankets, scraping ice off your car, dealing with seasonal affective disorder, and trying to balance the concept of warmth with ludicrous heating bills. Either way you see it, winter comes for all of us, so it’s at least worth understanding how we even got the word. 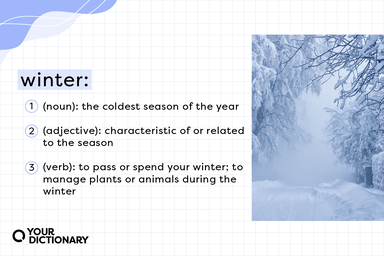 definitions of "winter" as a noun, verb, and adjective from the article
Advertisement

What Does Winter Mean?

Winter is the coldest season of the year, sitting between autumn and spring. Characteristics of the season include: cold, wet weather, short days, and trees without leaves. If you’re a grizzly bear (or a human who’s going through a lot, we’re not here to judge), winter is also the time for hibernation.

In the vast majority of cases, we use winter as a noun referring to the coldest season of the year.

However, winter can also act as an adjective to describe things characteristic of or related to the season.

Winter is also a verb that means “to pass or spend your winter” or “to manage plants or animals during the winter.”

The Origin of “Winter”

Winter is Germanic in origin with roots that include the Old High German word wintar and the Gothic word wintrus, both of which simply mean “winter.”

Some interesting theories suggest these words derive from a common Indo-European base use in words like wet and water, which help to characterize winter as the “wet season” thanks to the affluence of rain and snow in many regions.

Interestingly, most other Indo-European languages use the Latin base hiems. You can see this in other Romance languages. The French word for winter is hiver, while the Spanish word is invierno. However, you can see traces of this in the words hibernation, a word meaning “the action of passing winter.”

For some, winter is the “second half” of the year, compared to the “first half” of summer. While that’s a perfectly valid way to think about it, winter (like all other seasons) is still only three months.

What Is the Winter Solstice?

Winter solstice is the shortest day of the year. In the Northern Hemisphere, it’s usually around December 20 or 21. This is figurative; the day doesn’t suddenly go from 24 hours to 20 hours. It means that the amount of daylight on the solstice is substantially less than the amount of darkness thanks to a later sunrise and earlier sunset.

Winter as a Symbol

It’s hard to say when exactly we started calling the season winter, but the Anglo-Saxons actually counted years and age in winters. The Old English word ænetre actually meant “one year old.” Today, winter has similar connotations of the world getting older and nature dying with the leafless trees and snow-covered land.

But it’s not all sadness and introspection. So many cultures have warm celebrations during the winter season.