What Was the Underground Railroad?

What was the Underground Railroad? First of all: It was not actually a railroad. Rather, the Underground Railroad was a secret network used to help slaves escape from the South during the 19th century in the United States. It provided a means for enslaved people to find their way to areas where they would no longer be subjected to slavery. 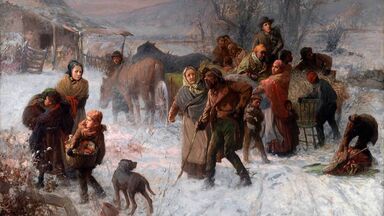 The Underground Railroad refers to a massive network of people who were so opposed to slavery that they were willing to help enslaved people escape bondage to find a better life outside of the South. There are many interesting facts and theories about the Underground Railroad, including how it got started, how it worked and where it was located. Because it was a secret operation, much of what is "known" about it is actually just speculation about what is likely to have taken place.

What Does the Name Mean?

It's natural to wonder why the term Underground Railroad is used since the words in that phrase are typically used in a different way. In this context, the word "underground" refers to the fact that the operation was clandestine, which means that its work was done in secret rather than being handled out in the open. After all, helping slaves escape from their owners during the time of slavery was against the law.

Because people fleeing slavery often had to travel great distances through unfamiliar territory, they put their lives in the hands of people who were willing to hide them or travel with them to help make sure they could safely traverse from one stop to another on the route. This, paired with the fact that people who led groups of people on these journeys were called conductors, helps explain why the word "railroad" is used.

Who Started the Underground Railroad?

It is widely believed that people of the Quaker faith played a major role in starting and operating the Underground Railroad, though this is not known for sure. However, Quakers were among the first to speak out against slavery. In the mid-1700s, leaders in the Quaker faith began to view slavery as an evil practice that deprived a portion of the population of liberty. They viewed slavery as an immoral act against humans and nature.

When Did the Underground Railroad Start?

Just like there is uncertainty about who started the Underground Railroad, there also is no common agreement about when it began. Some sources say it started in the 1780s under the leadership of northern abolitionists like Isaac T. Hopper, who was a Quaker. This could be because a letter written by George Washington in 1786 refers to an organized effort by Quakers to help a slave escape.

Other sources indicate that the Underground Railroad began later, around 1820. It's likely that small efforts evolved and grew during this time, leading to the development of a larger network.

Who Operated the Underground Railroad?

The Underground Railroad required the selfless efforts of many people who were opposed to slavery and were willing to risk arrest in order to help slaves find their way to safety. There were some formal conductors, such as Harriet Tubman, but they could not do the work alone.

The Underground Railroad was operated by an enormous secret network of people from many different backgrounds. It was made of up white abolitionists, runaway former slaves, free-born Black people, and even Native Americans. Some who helped were clergy or leaders in the abolitionist movement, while others were individual citizens seeking to do what was right.

Where Was the Underground Railroad Located?

The Underground Railroad wasn't a specific place. It started in various locations throughout the South, in areas where slave owners held slaves. There were many points of entry, as well as many points of exit. Most routes ran north, to states where slavery was not practiced, and beyond into Canada.

Journeys to Canada became commonplace after the Fugitive Slave Act of 1850 was passed, as it became more dangerous for runaway slaves to remain in the country. Not all who sought to escape slavery headed north, though. There were also Underground Railroad routes that headed further south, into Mexico or to Caribbean islands.

Uncovering Facts About the Underground Railroad

Now that you know more about the history of the underground railroad, you have a better understanding of the historical context of the years that preceded the Civil War and the Emancipation Proclamation issued by President Abraham Lincoln.

Learn more about key historical figures that played a major role in this time and history, such as Uncle Tom's Cabin author Harriet Beecher Stowe. You may also find it interesting to learn about the actions of abolitionist John Brown. From there, you may want to review key facts about the ongoing struggle for civil rights in America and around the world.