Getting ready for the SAT Writing and Language Test? You don’t need to study every single grammar rule in the English language, as the SAT consistently tests the same grammar concepts year after year. Keep reading to focus on the most important skills with these 15 key SAT grammar rules. 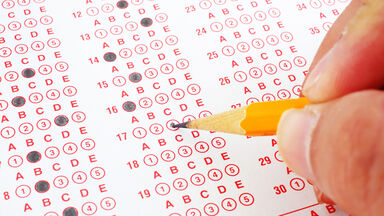 Modifiers are an important part of a well-written sentence. But if the modifier is too far away from the word it’s modifying, the sentence is confusing. You can prevent misplaced modifiers and dangling modifiers by making sure the modifier is as close to the correct noun as possible.

Incorrect Example: I live in a neighborhood with my brother called Riverside.

Correct Example: I live in a neighborhood called Riverside with my brother.

Be Sure of Word Meanings

Students taking the SAT should have an expansive, versatile lexicon to answer vocabulary questions. But don’t use big words in your writing if you’re not completely sure of their meaning. You could be using them incorrectly, which would affect your score more than using smaller words would.

Correct Example: The character feels devastated and alone when his best friend dies.

They may seem simple, but basic homophones pop up all the time on the SAT Writing and Language Test. Don’t forget to study the differences between small homophones such as its and it’s and longer words such as complement and compliment. Many multiple-choice questions will test how closely you can identify details between these words.

Idioms are familiar phrases that readers learn as part of the English language. These idioms typically include prepositions that don’t make logical sense outside of the idiom itself. SAT questions often change a preposition within these idioms to test your knowledge of figurative language.

Incorrect Example: Our baseball game was canceled for account of rain.

Correct Example: Our baseball game was canceled on account of rain.

It may seem like long, wordy sentences are more impressive than short ones. But long sentences are typically redundant and contain unnecessary descriptive words. Cutting unneeded words and clauses makes your writing cleaner and more readable.

Incorrect Example: The poem’s dark, foreboding tone sets up a spooky, frightening scene for the reader, since we don’t know what’s coming next because the setting is so scary and unnerving.

The writing section on the SAT is a great place to demonstrate your range of word choice and vocabulary, so don’t use an overly familiar tone. Using formal language and avoiding slang is good advice for any academic writing. It detracts from the argument you’re making and distracts the reader from your evidence.

Incorrect Example: The sidekick is super funny and reminds me of my best friend Darrin, who is like also super hilarious.

Correct Example: The sidekick’s humor is relatable for many reasons. The first reason is...

Whether you’re writing a lengthy essay or reading a passage for corrections, it’s easy to slip out of one verb tense and into another. Scan every verb in each sentence to make sure it’s in the tense it should be. For tricky multiple-choice questions, the answer is often in fixing the verb tense.

Incorrect Example: I was doing my homework when I hear a knock at the door. I get up and answer it.

Correct Example: I was doing my homework when I heard a knock at the door. I got up and answered it.

Include Both Parts of Correlative Conjunctions

Another tricky grammar rule on the SAT is parallel sentence structure. You may find a multiple-choice question that asks you to improve a sentence by choosing the word that best fits the passage’s sentence structure. Be sure that each verb phrase and clause aligns with other phrases and clauses in the sentence.

Maintain a Consistent Point of View

Double check the point of view in your sentences or in reading passages to make sure that it’s consistent. The most common error regarding point of view is slipping into second person (you) from first person (I). If you’re stuck on how to improve a sentence, be sure that the speaker is the same person throughout.

Know What Not to Hyphenate

Ensure that your pronouns match their antecedents, or the nouns they are replacing. Not only can this simple rule slip past you in your writing, it’s an easy way to throw you off in the proofreading section. Grammatical restrictions regarding the singular they have loosened in recent years, but you still need to make sure you’re writing as clearly as possible.

Be Sure Subjects and Verbs Agree

Just like pronouns and antecedents, the subjects and verbs in a sentence must agree. If the subject is plural, the verb must also be plural. Double check collective nouns like team or group that sound plural but are actually singular.

Use Commas With Purpose

A general rule of thumb is that you should be able to explain every comma that you use. Use commas around non-restrictive clauses, or clauses that don’t add essential information to your sentence. If you’re joining two sentences with a comma splice, make sure to use a coordinating or subordinating conjunction to avoid run-ons.

Writing in passive voice tends to obscure your meaning and confuse the reader. Go over your SAT essay for any sentences in which the subject is not performing the action. For multiple-choice questions, scan selected sentences to see if any possible responses could eliminate passive voice in the passage.

The SAT Writing and Language Test consists of multiple-choice grammar questions and an optional written essay. Whether or not the college or university you’re applying to requires the essay, you’ll need to demonstrate your knowledge of key grammar rules when correcting passages in the multiple-choice questions. Follow these SAT grammar rules to ensure that you can pass the SAT Writing and Language Test, and use them as a guide for your non-SAT writing as well.

Knowing the above rules comes in handy when multiple-choice questions become nuanced. When you take the SAT Writing and Language Test, you’ll find that each question prompts you to improve the wording of a single phrase, clause or sentence within a passage. Each question has the same format:

You may find that the original wording is best, or that one of the three options sounds better than the others. However, if you’ve studied your SAT grammar rules, you’ll know exactly which choice is grammatically correct.

The SAT Writing and Language Test assesses what you’ve already learned in high school and how well you can apply those skills in different situations. But sometimes an SAT score doesn’t reflect a student’s skills as accurately as possible. To make sure that you’re scoring as high as you can, read these tips for getting a high score on the SAT. You can also run through the 100 most common SAT vocabulary words for the SAT Reading section.