Roman speech created many terms used today, especially in the legal profession. For example, words such as affidavit and fiduciary have their origins in Latin, the language spoken in ancient Rome. Find out why so many legal terms use Latin, and the meanings of Latin legal terms. 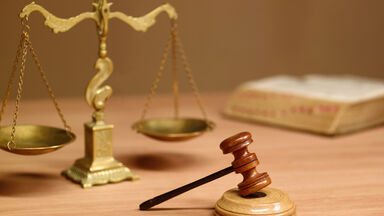 The legal system of the current United States has its history in ancient Rome. Simply because, ancient Romans, at one time, conquered most of what is currently Europe. Since our legal system comes from the first European colonists, the Latin terms used in Common Law of Rome have been adapted to our legal system.

Many legal words and phrases have Latin origins. Explore some of the most common Latin legal terms.

An ad idem is a good thing. Defined as towards the same, when used in a legal case or records, it means the parties agree over something. “To fully understand the agreement and the consequences, both parties must be ad idem.”

Ab initio means from the beginning. Commonly used in contract law, this legal term makes sure that the start of the contract is considered rather than when the issue was noticed. “The contract should be held valid ab initio.”

In Latin, ad hoc means for this. This term generally refers to a solution to a specific problem. For example, “An ad hoc committee might be created to handle green energy matters.”

To infinity and beyond! Well not really, but ad infinitum does mean to infinity. When this term is used in law, it means to continue without limit or non-terminating. “Proof requires facts to be demonstrated and so on ad infinitum.”

As regards the action is the meaning of ad litem. It is typically used in estates and guardianships. “The guardian ad litem is responsible for the child.”

If you watch courtroom dramas, this might be a word you hear quite often. In Latin, an affidavit means has declared on oath. It is a sworn statement of fact that might be used to clear an innocent person. “The prosecutor had a sworn affidavit in front of him.”

This Latin term means in another place. It is used in law when someone provides evidence about their wearabouts when a crime was committed. “He had an alibi during the time of the crime.”

When a parent goes to the doctor with their children, they sign for them. This is where alieni juris comes into play, which means of another’s right. “She used the right of alieni juris to sign for her infant's treatment as the mother.”

When you are an amicus curiae, then you’re a friend of the court. “An amicus curiae was allowed to submit a brief report to support the claimant.”

Bona fide is a word that you see outside of the legal realm, but it has an important position in legal terms due to the meaning in good faith. It also signals a moral and mental state of honesty. For example, “She had a bona fide claim for the death of her son.”

If you see the word caveat emptor, then proceed with caution. Why? Because caveat emptor means let the buyer beware. It is commonly used in property law doctrine. “Caveat emptor and be wary but check it out anyway.”

Corpus delicti or plural corpora delicti is important. Criminal cases wouldn’t have a leg to stand on without it. Corpus delicti means body of crime. Legally, it means to prove a crime was committed or the main evidence of a crime. “In Romeo and Juliet, the corpus delicti was the sword that killed Tybalt.”

Ex gratia means by favor. In law, it is something done voluntarily. For example, “Ex gratia payments were made to all the victims of the wreck.”

You hear this term quite often in real estate and trusts. Fiduciary is defined as something held in trust. It could be a legal relationship of guardian ad litem for legal action. It could also be used for a single action in litigation. “The guardians have a fiduciary duty to act in the best interest of the child.”

When you have habeas corpus, it means that you have the body. Habeas corpus is used in legal cases when releasing a prisoner from unlawful detention. For example, “His application for writ of habeas corpus was refused.”

Some things are just clear when looking at the evidence. This is where prima facie or at first face comes into play. It’s something that appears to be self-evident when first looking at the facts. For example, a woman sees a teen breaking into her car. At first glance, it looks like the teen is guilty of something. “There is prima facie evidence that he was breaking into her car.”

This is another Latin term you hear in TV land. Quid pro quo means something for something. For example, an item or service is traded for something of value. “The oil man and the well digger have a quid pro quo.”

If you’ve ever received a subpoena, then you have this term in the bag. As defined in Latin legal terms, it means under penalty. It is a writ that orders a person to offer testimony or evidence or face punishment. “A subpoena was sent to the witness to testify.”

How Is Latin Used Today?

Roman speech is Latin, and even though today it is considered a dead language, it’s still taught in schools and is read and spoken by many. It’s also living in many words in various languages which have Latin roots, including English.

Latin has contributed many words which are used in everyday speech, as well as in the legal profession. For more examples of common Latin words, you might look at Latin phrases we use every day. Also peruse some of the most beautiful Latin words.