A Ho, Ho, Whole Lot of Different Names for Santa Claus Around the World

We can all appreciate a large, magical man who brings us presents. Such is the promise of Santa Claus, whose origins range from being an elf to being just Some Guy (who supervises elves). While you might know him best as Santa, the guy’s earned himself a variety of names and identities over the centuries, and they offer some interesting insights into other cultures and their opinions about people who like chimneys and hearty belly laughs. 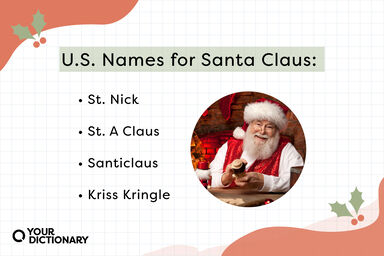 list of four different names for Santa Claus in the U.S. from the article
Advertisement

Santa Claus in the US

Interestingly, the name first appeared as St. A Claus in an article in the New York Gazette from 1773. That likely led to people squishing things together, leading to variations in the 1800s like Santiclaus and Santaclaus.

Most legends have some root in reality, and Santa Claus is no different. The real life root here is Saint Nicholas of Myra, a Christian monk who lived in current day Turkey at some point in the third century A.D. Not much is actually known about St. Nick aside from various good deeds that ranged from donating goods to the needy to saving sailors doomed at sea.

Folk legends about St. Nicholas’ feats and general goodness spread over the centuries, enough that he’s become the patron saint of a whole host of things, including brewers, merchants, archers, children, and thieves.

Claus likely came as a shortened form of Nicholas (or Niklaas in Dutch) as you get rid of the ni- sound. St. Nicholas’ penchant for giving gifts is also likely the influence for Santa’s current gift-giving career.

Kriss Kringle is actually a debased form of the German word Christkindlein or Christkind’l. This translates to “Christ child,” a reference to that famous baby in a manger that first started Christmas. It’s hard to tell why a reference to Jesus became a name for Santa, but by at least 1849, people seemed to refer to Santa Claus as Kriss (or Kris) Kringle.

That really took off with the original version of The Miracle on 34th Street in 1947, which featured a Santa character who went by the name Kris Kringle.

Kanakaloka is the Hawaiian version of Santa Claus. Hawaii isn’t the best place to travel by sleigh wearing a heavy fur suit, so Kanakaloka does things a bit differently than Santa Claus. He travels via a canoe with outriggers rather than in a sleigh. While he is sometimes depicted in traditional Santa red, he is often outfitted in a Hawaiian shirt paired with shorts.

What Is Santa’s Real Name?

Santa believers, please leave the room. Okay, for everyone who’s still here: Santa isn’t real. Trying to figure out a “real name” for the guy gets really confusing. Yes, he’s loosely based on St. Nicholas, but even that origin is steeped in literal centuries of legends, myths, and tall tales.

If you’re in the U.S., you can call Santa whatever you want, but Santa Claus is by far the most common name for the Big Guy.

Other Names for Santa Claus Around the World

Although the name Santa Claus has spread all over the globe, it’s not everyone’s preferred way to reference the jolly man. Many countries have different names for Santa and different customs surrounding him.

Rather than visiting homes in December, Agios Vasilios (also known as Saint Basil of Caesarea) visits homes on New Year’s Day, which is known as the Feast of Saint Basil. Families traditionally set a place for Agios Vasilios to join them for their New Year’s meal. The real-life Saint Basil was known for helping the poor, so families also make charitable donations in his memory.

Daddy Christmas isn’t the only giver of secret gifts in the winter. On January 5, the night before the Epiphany, La Befana, the good Christmas witch, rides her broom through Italy and drops off gifts to children along the way.

Some people in China refer to Santa as Lan Khoong-Khoong, which means “nice old father.”

The Russian equivalent of Santa Claus is Ded Moroz, which translates to “grandfather frost.” Ded Moroz carries a staff and is accompanied by horses instead of reindeer. He most commonly appears in a blue robe lined with fur, though he is sometimes shown in a red or metallic robe. He makes his gift-giving rounds on New Year’s Eve via a troika instead of a sleigh.

This is probably an alternate name for Santa that you’ve already heard in the U.S., but Father Christmas is most commonly used in England and the rest of the United Kingdom.

Hoteiosho is the Japanese equivalent of Santa Claus. Hoteiosho is a Buddhist monk who looks and behaves in many ways like Santa Claus: He has a big belly and goes from house to house leaving toys for children. Japanese folklore also says Hoteiosho has eyes in the back of his head, so he can see clearly how children are behaving.

Santa Kurohsu is simply the Japanese name for Santa Claus.

Jólasveinar is the group name for the 13 Santa-like figures in Iceland. Referred to as the Christmas boys or Yule lads, these gents share the responsibility of visiting homes throughout Iceland over the 13 days that precede Christmas, leaving behind secret gifts for well-behaved children in each home.

In Finland, Santa Claus goes by the name Joulupukki, which translates to “Christmas goat, buck, or billy goat.” Some tales suggest that he was a man turned into a half-goat, half-human creature, but most modern depictions of him are pretty much in line with the classic Santa we know and love.

Joulupukki visits homes to distribute presents to children but not in secret. Instead, Joulupukki knocks on the front door or rings the doorbell to signal his arrival. Families often serenade the goat with Christmas carols. He still travels by a reindeer-pulled sleigh, but his reindeer don’t fly.

In Norway, Santa Claus is called Julenissen. This comes from small gnome-like creatures in Scandinavian folklore called nisse. Sometimes described as hobgoblins or spirits, julenisse are mischievous yet benevolent and are said to bring luck and prosperity as long as the families they visit keep them happy. Julenisse specifically refers to a Santa-adjacent nisse that brings special gifts to children throughout Norway at Christmastime.

While Turkey is a Muslim country where Christmas is not celebrated, there is still a Santa Claus equivalent there. After all, Antalya, Turkey, is where the real Saint Nicholas was born and lived his life.

While Christmas is not observed in Turkey, New Year’s Eve is a big holiday celebration there. That’s when Noel Baba visits, bearing gifts he carries in a sack. Noel Baba is sometimes depicted in a sleigh and sometimes on a raft. He wears a red suit, though it's scaled back to account for the Turkish climate.

In Portugal, Santa Claus is called Pai Natal, and the customs and traditions are largely the same as Santa. However, some in Portugal say that it’s actually the Baby Jesus who leaves gifts for the kids on Christmas Eve.

In Spain, Papá Noel travels the country on Nochebuena (December 24), leaving gifts for children in the overnight hours. Other than presents left by Papá Noel, though, other gift-giving waits until the Epiphany, which is January 6.

In Brazil, Santa Claus is usually referred to as Papai Noel, though the name Bom Velhinho, which translates to “good old man,” is sometimes used.

Due to the climate in Brazil, most homes do not have fireplaces, so Papai Noel doesn’t come in via a chimney. Children in Brazil hang socks near a window for Papai Noel to fill when he visits after they go to sleep on Christmas Eve.

In France, Santa Claus is called Père Noël, meaning “Father Christmas.” He is typically depicted in a white fur cloak with an attached hood. Unlike in the U.S., Père Noël is more likely to place goodies in children’s slippers or shoes instead of stockings hung by the fireplace.

Rather than leaving milk for Santa to drink, French children are likely to pour him a glass of wine. Again, let’s hope Père Noël has a designated sleigh driver.

In Austria, Saint Nikolaus visits homes to bring gifts on December 5, which is the night before Nikolaustag, (Saint Nikolaus' Day). He behaves very much like Santa Claus.

In Switzerland, Santa Claus goes by the name Samichlaus. As with Austria’s Saint Nikolaus, December 5 is the day Samichlaus spreads happiness (in the form of gifts) to children throughout the country.

Based on Saint Nicholas, Sinterklaas is the name for Santa Claus used throughout the Netherlands. As with other countries where traditions surrounding Santa are linked to Saint Nicholas, his visit occurs on December 5, the evening before the Feast of Saint Nicholas.

Based on Saint Nicholas, Święty Mikołaj is the primary Polish equivalent of Santa Claus. Children wake up on December 6 to find a small gift from Święty Mikołaj, signaling the start of the Christmas season. The majority of gift giving, however, is reserved for Christmas day.

The oldest name for Santa in Germany is Weihnachtsmann, which roughly translates to “the Christmas Man.”

A Santa By Any Other Name

Santa Claus goes by so many names all over the world, but he largely operates the same way, across a lot of cultures. It just goes to show that every culture needs a mysterious-but-benevolent figure who gives gifts to children. Of course, Santa is just a small part of celebrating Christmas, and if you don’t celebrate Christmas, there’s still plenty of winter fun and learning to be had.