The Most Spoken Languages in the World (in Order) 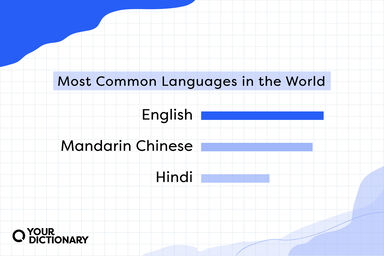 English is the most commonly spoken language around the world. While there is no official language in the United States, most American citizens speak English, as do citizens of the United Kingdom, Canada, Australia, and countries once inhabited by the British empire.

Worldwide, 370 million people speak English as their native language and over a billion more learn it as a second (or third) language, making it the most commonly studied language in the world as well. Fifty-nine countries name English as an official common language.

Mandarin Chinese is the second-most spoken language in the world, even though it’s spoken in the most populous country. It far exceeds English in terms of native speakers, as over one billion people speak Mandarin Chinese as their first language.

But Mandarin Chinese has fewer second and third-language learners than English (200 million or so), making its total number lower.

Primarily spoken in India and other South Indian countries, Hindi is the third-most spoken language in the world. Most Hindi speakers are native speakers, with around 100 million more learning Hindi as a non-native language.

Hindi is an official language of India (as is English), but it’s not the country’s national language.

Spanish is second to Mandarin Chinese in native speakers (475 million). Like English, Spanish spread around the world as a result of European exploration and is now spoken in over 20 countries as an official language, including Mexico, Argentina, Spain, and Ecuador.

While English may be the most commonly spoken language in the world, it has been heavily influenced by the Spanish language.

Known as the lingua franca (“bridge language”) long before English, French is spoken by 76 million native speakers and nearly 200 more non-native speakers. It’s the second-most common official language, with official status in 29 countries — 21 of which are on the African continent.

Modern Standard Arabic is the only language on the top ten list that has no native speakers — all 274 million speakers learned it as a non-native language. That’s because Arabic is technically a macrolanguage with over 30 dialectal varieties.

Arabic speakers learn Modern Standard Arabic as a universal language to communicate with each other, in the media, and in the educational world.

The majority of Bengali speakers (160 million) live in Bangladesh, where it is an official language. Despite this, it’s still the second-most common language in India, with small Bengali-speaking populations also found in the Middle East, South Asia, and Europe. Most people who speak Bengali learn it as a first language.

The number of people who speak Russian exceeds Russia’s population, which is 145 million people. That’s because Russian is also the official language of many countries that were formerly part of the Soviet Union, including Belarus, Kyrgyzstan, and Kazakhstan.

It’s also spoken in 19 additional countries as a lingua franca, making it the most commonly spoken language in Europe.

Over 200 million people speak Portuguese as a native language, with the rest learning it as a second or third language.

Of the nearly 200 million people who speak Indonesian, only around 40 million of them are native speakers. It’s a lingua franca between Indonesia’s 700 languages, including Javanese (the most common language in Indonesia), Sundanese, Minangkabau, and Musi. However, Indonesian is an official language of Indonesia, and is most commonly used in media and educational contexts.