Whether you're in the process of learning to speak Portuguese or you'd just like to master a few common terms in the language, these words are great ones to start with. Discover 40 common and useful Portuguese words, including what each one means in English. 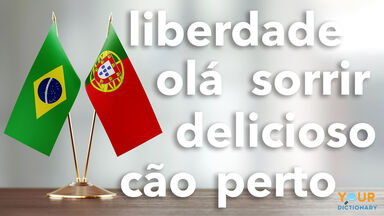 Want to learn some of the most common Portuguese words? These basic Portuguese terms are key everyday words to master. Whether you're planning to travel to Portugal or Brazil and want to know some basic words or are trying to build a strong foundation on which to develop fluency in the Portuguese language, these are great words to learn when you are just getting started.

Portuguese is a beautiful language with many words that are aesthetically pleasing to the eye and ear, while also conveying lovely meanings. Go beyond the most common Portuguese terms to discover a selection of beautiful, yet commonly used words.

From mastering some of the most common Portuguese words to learning some words that are particularly beautiful, once you learn the terminology discussed here you'll be on your way to being able to incorporate some words from this lovely language into your vocabulary. Don't stop with Portuguese. Continue building your knowledge of different languages by discovering 40 powerfully beautiful Japanese words. From there, discover 60+ essential Hindi words.