Whether you’re traveling to Mexico or just curious about language, it can be good to have a few common Mexican slang phrases under your belt. Explore popular slang expressions and fun words found around Mexico. 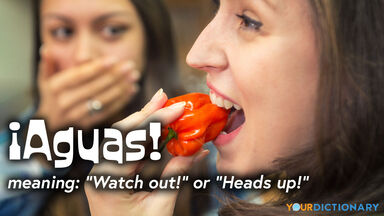 mexican slang aguas watch out or heads up
Advertisement

While eggs might be the literal meaning of huevos, typically, people mean "heck yeah" when they say it. You might also see it used to mean "for sure," "of course" or to express that something is mandatory. It really depends on the situation.

As far as slang, "a poco" is a phrase you might use while gossiping with your friends. In English, it means "oh, really" or "no way."

If you use cabrón literally, then you are talking about a male goat. However, this derogatory term typically isn’t used in that sense. Instead, cabrón is used if a man is a jerk or a**hole, while cabrona is used for a woman.

The slang word chafa is used to show that something is crappy, cheap or has no quality. Like a lot of English slang words, it lacks a literal meaning. So, it’s one of those words you can’t mistake when it’s said.

You might use the phrase "heck no" or show disapproval in English, but in Spanish slang, this would be chale! You might also find this slang word to have the literal meaning of chalet, which is a wooden Swiss-type cottage.

You know how when you drink too much alcohol, you feel like crud! Well, cruda is the slang term for a hangover. However, it also has the literal meaning of raw, which has nothing to do with drinking.

Used all over Mexico, gacho is a popular slang term to mean "not cool" or bad. This term can apply to people, objects and situations. They are just not cool, man.

This slang phrase is used to ask for a favor in Mexican Spanish. You might also think of "Hazme el paro" as asking someone to "do you a solid."

La neta is used in slang to mean truth. But neta can also be used to mean "Really?" or "Are You Serious?".

While the use of no mames can depend on the situation, it’s typically used to mean "no way." There are a few fun ways you could fit this into a conversation.

However, no mames isn’t the only way that you can say "no way." You can also say no manches. This also translates to "no way" in slang speak.

Orale can be used in a lot of different ways, but the main one is to express surprise. It’s similar to saying "heck yeah" or "right on." You could even use it to mean "Wow!"

Pinche is a unique word in that you use it in front of an insult to enhance it. You could think of it as a strong explicit additive like d*mn.

The literal definition of the word padre is father. However, if you say "¡Que padre!", that means "That’s cool!"

While this Mexican slang word might literally translate to "what fart," it’s a common way for people to say "what’s up." This phrase is generally only used with friends.

Slang doesn’t just stop at expressions. You can find a lot of fun slang words around Mexico for people too. Expand your vocabulary with a few of these gems.

Do you have a friend that is so close you are brothers? If so, then you would use the word carnal to describe them. In Mexican slang, carnal means friend or buddy. This can also mean "of the flesh," which makes sense when you think about family and brotherhood.

Everyone has met a brat, kid or punk in their lifetime. Well, the slang word for a kid in Mexico is chamaco. You’ll notice it’s quite similar to the word chamuco, which stands for devil or evil person. You wouldn’t want to confuse the two.

If you are taking a trip to Mexico City, then chilango is a term you might want to learn. Why? Because chilango is the term for Mexico City residents or those native to the capital.

The slang term cholo is commonly heard in the United States around the southwest. It can be loosely defined as a Mexican/American gangster or Mexican gangster with a very distinctive dress style.

The literal meaning of fresa is strawberry in Spanish. However, fresa is slang for someone who’s stuck up or uppity. Think upper class or valley girls.

Güey loosely translates to man. However, it’s one of those fun words that can have a positive or negative connotation depending on how you use it. Interestingly enough, it can also be spelled whey!

While guey translates to man, jaina is chick or chica. You might also use it for your girlfriend.

The word naco is used to describe someone that is low class in Mexico. However, you might also use it for someone that has bad manners.

The slang term pendejo can be a derogatory term depending on how you use it. However, this word literally translates to "pubic hair," but it is used in slang to call someone an idiot.

In Mexico, prieto is a slang term for someone with darker skin. However, this isn’t an offensive slang term. It’s similar to calling someone African American or Black.

With a name like Juan or Matthew, you probably meet a tocayo all the time. Tocayo is what you call someone you share a name with or your namesake.

There are a lot of different ways to talk to your friends. Vato is another slang term for dude or mate.

Have you ever heard someone’s wife referred to as an old lady? That’s similar to what the term vieja means. It’s Spanish for a wife or girlfriend.

Every language has a few interesting slang words that are hard to categorize. Dive into a few fun slang phrases and words you aren’t going to forget.

If you’ve ever been hit with a flip flop by your Mexican aunt or mother, then you know the meaning of chancla. Literally, it means a flip flop, but in slang, it’s the beating you get from said flip flop as punishment.

This slang term is used to identify emigrants or those of Mexican descent born in the U.S. So, if your parents are from Mexico but you’re born in the U.S., native Mexicans would call you a chicano.

Are you using mucho too much and trying to change it up? Then chorro can be an answer to your needs. Chorro can mean much or a lot. However, be careful because it can also mean diarrhea.

Codo is a unique slang word from Mexico that literally means elbow. However, it’s used to mean stingy. You typically see the phrase ser codo meaning "to be stingy."

In English, you might think of this as dough. But in Mexican slang, you use feria to mean money or dough. It can also mean pocket change.

Is someone getting all up in your business? Then metiche is a word you might want to know. It is a Spanish phrase for someone being nosy.

Soft drinks go by many names in the United States. However, if you are looking for a Coke or Pepsi, you could use the slang term refresco. However, be careful because it can also mean a bribe.

Just like drinks, money also has a lot of names in Mexico. A slang term for money is varos.

You’ve probably seen a vocho a time or two and didn’t even realize it. Vocho is Mexican slang for a Volkswagen Beetle or a bug.

While it's fun to know a few slang words you can use in Mexico, it can be helpful to see them in sentences too. View a few fun sentence examples using Mexican slang words.

When it comes to learning a new language, you need to get past just the formal terms. To really dive in, it’s important to understand the slang. Now that you’ve dipped your toes into the slang pool, it’s time to learn more slang by checking out Italian slang.