60+ Essential Hindi Words (Including the Most Beautiful)

Hindi is an Indo-Aryan language predominantly spoken in India, as well as areas in Africa and Yemen. Learn common Hindi words and greetings to add to your language library. Get lost in beautiful Hindi words with powerful meanings. 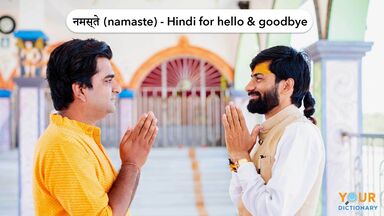 Hindi is a unique language. Like English, there are informal and formal types of greetings. However, Hindi has more variations in how you speak to strangers and authority than you find in English. Learn some common Hindi words used for greetings. Additionally, since Hindi is written in Devanagari script rather than the Latin alphabet, you use the pronunciation of the way the word is spoken.

Beyond just common greetings in Hindi, you can find a few basic Hindi words. Explore these Hindi words, pronunciations and definitions in English. Get lost in these common phrases found in this beautiful language.

Hindi words don’t just stop at the common Hindi phrases. There are other beautiful Hindi words to describe family members, relationships and emotions. Explore some Hindi words to learn to say to your family.

Take your basic and beautiful Hindi word list home with you by downloading this unique printable list of Hindi words. The printable includes the words in Hindi, their pronunciations and their meanings in English.

When you are traversing the globe, it can help have a few Hindi phrases in your vocabulary. Check out some of these useful and common Hindi phrases.

The preferred language of India, Hindi is a beautiful language written using Devanagari script rather than the Roman alphabet. Now that you’ve looked at a few Hindi words, you might be interested in learning English words from Hindi and Urdu.