Cherokee is an Iroquoian language and remains the healthiest of the native North American languages. However, use of the language dwindles yearly as fewer families continue their bilingual roots. The Cherokee name for their language is Tsalagi Gawonihisdi. 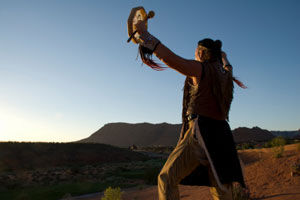 Brief History of the Cherokee People

The Cherokee, or Tsalagi, are a Native American tribe originally hailing from the area near northern Georgia and North Carolina. In 1838, the United States government forcibly removed them from the southeastern United States to what was then the Oklahoma territory. Historians named this event the "Trail of Tears."

The term "Cherokee" is actually taken from a Creek Indian word meaning "people with another language." White settlers learned this term from their interactions with the Creek and erroneously affixed it to the Aniyunwiya, or Tsalagi, people. The terms "Cherokee" and "Tsalagi" are used interchangeably today.

Today, the Cherokee people live throughout the United States. However, the greatest concentrations of native Cherokee speakers live in North Carolina and Oklahoma. Estimates indicate only about 1,500 to 2,500 people speak Cherokee fluently.

About the Cherokee Language

Linguists describe the Cherokee language as polysynthetic, which means the language contains many morphemes. Morphemes are the smallest linguistic units with meaning in a given language. Based on its difficulty level, Cherokee is considered a Class IV language.

Composition of the Cherokee Language

The Cherokee language combines morphemes, or linguistic units with meaning, into new combinations and chains to create meaning. Unlike proper English, Cherokee sentences often start with the object, followed by the subject, and then the verb. Some elders suggest this is because the Cherokee focus on outside things first and inwardly things last.

The word "ditiyohihi," for example, contains a chain of morphemes. Each morpheme means something different, but when combined, they give a new, precise meaning. In this example, di-ti-ya-hi-hi translates as "he who argues repeatedly, on purpose, and with a purpose." In other words, he's a lawyer.

The Cherokee language as spoken by many elders includes six different tones. Younger generations don't use as many tones.

From 1809 to 1821, a half-Cherokee man named Sequoyah, also known as George Guess or Goerge Gist, produced a handwritten system to write in Cherokee. His original Cherokee syllabary had 86 symbols. While some symbols look like the familiar alphabet, they are pronounced differently and each symbol represents a syllable rather than a letter. Sequoyah and his people were inspired by written English.

To make the newspaper readable and look great, they had to modify some of Sequoyah's symbols using Roman letters and modified Roman letters from the printing press. Because this was the first mainstream distribution of the written language, the Latinized version became the primary writing system for all Cherokees. The new syllabary includes 85 characters that represent all the sounds used in spoken Cherokee.

All languages "drift" over time, or devolve into dialects through use and development by local populations. Cherokee is no exception. Cherokee includes two major dialects. The Giduwa dialect spoken by the Eastern Cherokee remains closer to the original language.

The Otali dialect, also known as the Overhill dialect, varies the most from the language as written by Sequoyah. Otali contains many pronunciation variations, as well as the most words adopted whole cloth from standard American English.

To get a better idea of what the Cherokee language looks and sounds like, check out some common Cherokee words translated to English using the Cherokee-English Dictionary Online Database:

While it's not very prevalent in mainstream pop culture, there are several great examples of bringing the language and culture of the Cherokees back to life in big ways.