The Sanskrit Language: A Look at Its History and Modern Impact

The Sanskrit language, one of the oldest languages in the world, is the ancestor of many modern languages in Northern India. If you’ve ever referred to your mom as mother or eaten an orange, you’ve partaken in the ancient Sanskrit language yourself. While it’s probably not something you’ll hear in its original form when you’re on a date or ordering some pasta, Sanskrit is considered the mother of all languages — and it has a surprising history. 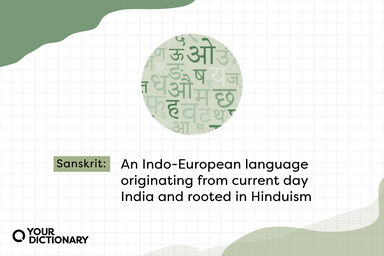 Sanskrit is an Indo-European language that came from current day India and is rooted in Hindu beliefs. The word Sanskrit comes from samskrtam, which means “put together or well-formed.”

When people refer to Sanskrit, they’re usually talking about Classic Sanskrit, which had rules and grammar that were first recorded around 400 B.C., but the language still existed prior to that in what we call Ancient Sanskrit.

Like English in the modern day and Latin in the Middle Ages, Sanskrit was considered a lingua franca, or a language used to communicate between people who do not share the same first language.

The Origins of Sanskrit: How Old Is the Language?

Ancient or Vedic Sanskrit is the oldest form of Sanskrit. Although there are no exact dates for the first appearance of this language, experts believe that Ancient Sanskrit has been around since 1000 B.C.

What is known about Ancient Sanskrit is that it consists of 52 total letters: 36 consonants and 16 vowels.

At the time, Sanskrit was strictly an oral language, passed down from generation to generation, most notably in the Rigveda, which is a collection of poems appearing as hymns, incantations, and theological discussions.

This is also the earliest surviving work of any Indo-European language, even preceding Homer’s Iliad and Odyssey. While experts have translated parts of the Rigveda and understand that it uses a highly defined poetic meter, the work as a whole is largely incomprehensible and indecipherable, perhaps intentionally so.

The Evolution of Sanskrit

The Vedic language began to evolve into Classical Sanskrit around 400 B.C. when Panini, a researcher of grammar and linguistics, actually wrote down and refined the language. This was presented in the Ashtadhyayi.

To this day, the Ashtadhyayi is considered the sole source of the grammar and vocabulary rules of Sanskrit, and if you’re looking for rules, you’ve found them.

Panini’s work outlines 3,959 rules that break down the language, and these weren’t brief rules. These were some expansive guidelines that provided in-depth explanation, analysis, and instruction for word formations and preferred grammar usage.

Sanskrit Linguistics and Development of Words

Sanskrit is arguably one of the most linguistically advanced languages in history, and it makes sense that so many languages have borrowed from it. Hindi, Kashmiri, and other languages in North India have a direct root in Sanskrit.

Some prominent features of Sanskrit include:

Compounds are also used frequently within the Sanskrit language. There are four categories of compounds which include the:

What Happened to Sanskrit?

Despite its initial prominence as a lingua franca, Sanskrit eventually faded, especially in its oral form. Theories for Sanskrit’s decline are many and various.

Some believe that the language suffered the same fate as Latin, dying out because there were simply so many other languages that were becoming more popular.

Sanskrit may have also seen a decline because it was no longer being used by many of the strong political institutions. This ties into certain controversies about the language, mainly its inherent religious nature, which is often at odds among those looking for more inclusive, secular language.

Many people mistakenly refer to Sanskrit as a dead language, like Latin, but according to census data, over 14,000 people still claim Sanskrit as their main language today. Although the Sanskrit language is not as popular as it once was, it still appears in various forms, including some common English words.

Some organizations in India, Nepal, and Indonesia use the Sanskrit language in their mottos. These mottos are mainly in reference to educational or social institutions, similar to the way institutions and schools in the West use Latin for legal terms and mottos.

Sanskrit words have made their way into the English language as well. Some of these words are exactly the same as their Sanskrit counterparts or have slight modifications, especially as they relate to religion and other words of Hindi origin.

Other English words are actually based on a Sanskrit word, but over centuries of modification, sculpting, and cultural shifts, they have formed into new words that we use today. For example, success comes from the Sanskrit word saphalata.

Other English words with a Sanskrit derivative include: