Latin is a beautiful and old language. In fact, many phrases and mottos you see today are based on this language such as semper fidelis, the motto for the Marine corps. Explore more Latin phrases by looking at Latin phrases about death. 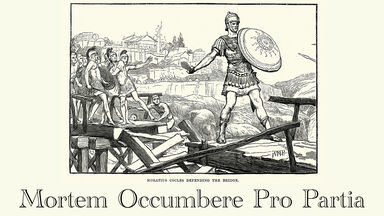 What does the phrase memento mori mean? Remember death. It’s a unique phrase used by Roman generals and others, typically during their victory parade. Your mortality is most apparent after a battle.

Mortem obire can be broken down a few ways. It could mean to face death. The Latin phrase about death could be translated as leave this life to remember someone you’ve lost.

Looking for a unique Latin phrase about death? Try extremum vitae spiritum edere, which translates to give up the ghost. Just let that one sit with you for a while.

Another phrase that works to break down the finality of death is animam agere. It translates to mean to have one’s last breath. It’s a poetic phrase for a final moment.

The Roman’s had a phrase for all different types of deaths. Mortem oppetere translates to meet a violet death.

Rather than being a violent death, mortem sibi consciscere translates to death by suicide. This phrase could work well during suicide awareness month or for a tattoo in remembrance.

A death for your country is mortem occumbere pro partia. This phrase could also be used for a Roman noble death.

This Latin phrase for death is used when a death is natural. No foul play occurred in this type of death; it was just time.

Looking to translate bringer of death in Latin? Look no further than the word mortifer. It also translates to lethal and fatal.

Honor is important. In fact, there are those that would rather face death than dishonor. If you want to exemplify this in Latin, mori quam foedari means death before dishonor.

When death comes too soon or is untimely, you call it a mors immatura. However, it isn’t just deaths happening at a young age, it’s also for those that depart before they’ve reached their full potential in life.

Looking for a Latin phrase covering death for those who die young, then mature decedere is correct. This could be the death of a child or just someone considered young.

Death is the end. It can’t be avoided, and everyone succumbs to death at some point. The Romans summed this up poignant in death conquers all or mors vincit omnia.

When it comes to death by poison, you can say this a few ways depending on who is getting the poison and how. Explore Latin phrases covering death by poison.

This one probably doesn’t happen too much in modern times. However, according to literature, poisoning bread was big in the Roman times. Dar venenum pane translates to poisoning someone's bread.

Romeo and Juliette did this one. Venenum sumere means to take poison.

Rounding out the death by poison is veneno sibi mortem consciscere. In Latin, this means to poison yourself.

When it comes to death, the Roman’s had several phrases covering every death scenario. Learn more about this unique language by looking at most beautiful Latin words and meanings.