34 German Idioms to Spice Up Your Conversations

German is a fascinating language with a rich history. When you're learning German, using idioms can help you understand more about German culture — and it can help you sound like a native speaker! Take a look at these German idioms that are sure to spice up your conversation. 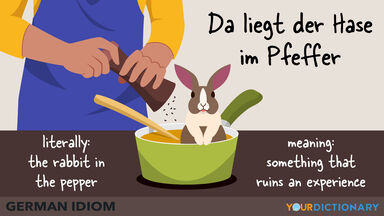 Just like English, German has many idioms that involve animals. From "having a cat" to being "beneath pigs," there are all kinds of German phrases that get the point across!

Da liegt der Hase im Pfeffer means the rabbit in the pepper, which is a description of something that ruins an experience. It comes from the Middle Ages when people would make rabbit stew with pepper. If the pieces of rabbit were too big, the stew would be ruined. It's similar to the English idiom "fly in the ointment."

When you want to emphasize the most important point, you might describe it as "the heart of the matter." You can also use the German idiom da liegt der Hund begraben, which means the dog is buried there. It comes from the old tradition of marking valuable trunks with the image of a dog so you knew that something important was in there.

How do you know if a party will be good or not? If you hear that da steppt der Bär — the bear dances there — then it's sure to be a good time! The origin is in the trained bear dances at medieval festivals.

The English idiom "a stone's throw" describes something that's not very far away. In German, das ist ein Katzensprung, a cat's jump, serves the same purpose.

When a dangerous situation has passed, German speakers say Die Kuh ist vom Eis. It means the cow is off the ice, similar to the English idiom "we're out of the woods."

Have you ever felt like you don't belong? You may feel like you're a "fish out of water," but in German, you're ein Fisch auf dem Trockenen — a fish on the dry.

English speakers often use "cuckoo" to describe someone who is acting crazy. German speakers are more general — einen Vogel haben means to have a bird. It comes from an old myth that insanity is caused by little birds living in your head.

Sometimes you may feel like you can't believe your eyes, or that you must be going crazy. In German, you'd say ich glaube ich spinne, or I think I spider. The lowercase spinne means "I spin," making the phrase "I think I spin." However, uppercase Spinne means spider, making the silly-sounding idiom even sillier.

Ever feel like your small wins don't matter? German speakers would tell you that even the smallest accomplishments are important with the idiom Kleinvieh macht auch Mist — small cattle also make poop. It's a funny way to remind yourself to celebrate all your accomplishments!

When German speakers have had a stroke of luck, they may say Ich habe Schwein gehabt. It means I've had a pig, which refers to the ace in a deck of cards' traditional name as the Sau — "pig" — which can be very lucky for the person holding it.

The next time your friend embarrasses you in public, consider telling them that they are sich zum Affen machen. It means making oneself into an ape — or making a fool of yourself.

Pigs aren't always lucky. Another German idiom is unter aller Sauˆ, which means beneath pigs. It indicates that something is beneath one's dignity.

People who live in rural areas might say they live in "the middle of nowhere." German speakers have a much more poetic way of putting it with wo sich Fuchs und Hase gute Nacht sagen: where the fox and rabbit say goodnight.

Germany is famous for its distinctive foods. Fish, mustard and especially sausages are staples of a German diet and have made their way into many German idioms and colloquialisms as well.

More of a German proverb, Alles hat ein Ende nur die Wurst hat zwei indicates that all good things must come to an end. It translates to everything has an end; only a sausage has two. It's even the title of a famous German song by Stephan Remmler.

Once something bad happens, you know you're in trouble. The German idiom da haben wir den Salat means now we have the salad — referring to the chaos of a tossed salad. It's similar to the English idiom "now we're in a pickle."

In German, you may refer to someone who gets unnecessarily offended as die beleidigte Leberwurst spielen, which means playing an offended liver sausage. It comes from the belief that the liver is the source of bodily anger.

When English speakers refer to someone as "pushing up daisies," it means someone has died. The German equivalent would be die Radieschen von unten anschauen — to see the radishes from underneath.

Ever want a free upgrade or free dessert? When you ask for special treatment in German, you eine Extrawurst haben, which means ask for an extra sausage.

A person who always has to contribute their ideas is always "adding their two cents." The German idiom for the same concept is er muss zu allem seinen Senf dazugeben — he has to add mustard to everything.

Once things get serious, German speakers may say jetzt geht’s um die Wurst. It means now it's about the sausage. It's similar to the English idiom "down to brass tacks."

If you've wanted someone to get to the point, you can use the German idiom Jetzt mal Butter bei die Fische — now butter with the fish. It's another way of urging someone to "cut to the chase."

Have you ever made a silly mistake, or lost something right in front of your face? German speakers may say that you have Tomaten auf den Augen haben (tomatoes on your eyes). It indicates the red, puffy eyes you get when you're overtired.

English speakers use the idiom "beat around the bush" when they're not getting to the point. German speakers say Um den heißen Brei herumreden, which means talk around the hot porridge. It refers to eating from the outer edge of a bowl of porridge when the middle is too hot.

Sometimes you need just the right idiom to explain a life situation. Check out these great German expressions that you need in your everyday vocabulary.

German has an idiom that's close to the English "beating a dead horse," meaning that one is constantly talking about an issue that is over and decided. They say das ist Schnee von gestern — that's yesterday's snow.

When you "keep your fingers crossed" in English, you're wishing luck for someone. German speakers die Daumen drücken instead — they press the thumbs. You can also say ich drücke dir die Daumen (I'll press my thumbs for you.)

What do you say when someone is acting strangely? In German, you can say du hast nicht mehr alle Tassen im Schrank (you're missing cups from your cupboard). Another idiom for this sentiment is du hast nen Sprung in der Schüssel, which means "you have a crack in your dish."

English speakers say "you can bet your life" when they're assuring someone of a fact. The German equivalent is da kannst du Gift drauf nehmen — you can take poison on that.

Have you ever gotten carried away? German speakers may advise you die Kirche im Dorf lassen, which means leave the church in the village. It typically means "don't exaggerate your story."

It's said that during World War I, deployed German soldiers would say ich verstehe nur Bahnhof (I only understand train station) because they wanted to go home. Today, the idiom is similar to the English expression "It's all Greek to me," meaning that they don't understand something. It can also indicate that a person's mind is elsewhere.

Roughly equivalent to the phrase "lies don't travel far," Lügen haben kurze Beine means lies have short legs. It refers to a lie's tendency to come back around to the person who told it.

English speakers are familiar with the proverb "Don't count your chickens before they've hatched." In German, the same feeling comes from the phrase man soll den Tag nicht vor dem Abend loben — don't praise the day before the evening.

When a German speaker is surprised, they may say von den Socken sein. It's an idiom to express shock, but translated into English it means to be from the socks.

A Dash of Deutsch

These handy idioms are great for sprinkling in conversation, adding to emails or text messages and understanding more about the German language. No matter what level German learner you are, they're sure to play a role somewhere! For more German instruction, check out these German words with unique meanings. You can also explore a list of English words of German origin if you're curious about how German has influenced the English language. When you have your fill of German, try out some other intriguing idioms from around the world.