Idioms in Tagalog: Common Sayings and What They Mean

It used to be that the only people interested in knowing idioms in Tagalog were Filipino or at least living in the Philippines. These days, things have changed considerably. The U.S. State Department reports that there are about four million Americans of Philippine ancestry in the United States. Most of these Americans speak English as well as their native Filipino dialect, which in many cases is Tagalog. Learning a few idioms in Tagalog is a great way to share some fun conversation. 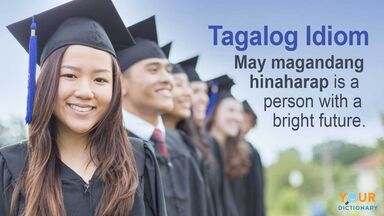 Making Friends with Idioms in Tagalog

Whether you're trying to connect with co-workers, get along with your fellow students, or find a common thread with your new neighbors, familiarizing yourself with some idioms in Tagalog can break the tension. Here are some Tagalog idioms to get you started winning hearts and minds in your Filipino community.

Magaan ang dugo, literally meaning "light blood," is someone who is easy to get along with. If you tell someone you're a magaan ang dugo, they'll know you're a good person.

May magandang hinaharap is a person with a bright future. It's commonly used with children and young adults, understandably. If someone says this about you, you're well on your way to being taken out to dinner.

Makalaglag-matsing is what you give your dining companion: an enchanting look. Literally, you are so beautiful, you "can cause a monkey to fall."

Ilaw ng tahanan is who you'll meet when you're taken home. Literally, it means "light of the home," which is a really nice way to refer to the spouse. The Tagalog language is filled with terms of endearment, particularly surrounding the family unit.

Nagbukas ng dibdib is what you'll be when you're really serious; it means "man who has opened his heart." Loosely translated, this refers to the guy who proposed marriage.

Beware of These Idioms

Unlike the more positive idioms listed above, these are some of the more popular idioms for casting a negative impression about someone. Just insist you're a magaan ang dugo when you hear these phrases and you might stand a better chance of making it through these slanderous idioms on a positive note.

Mahina ang loob is literally "weak-willed." It means that someone is a coward.

Balik-harapis is a Benedict Arnold, or a two-faced betrayer. There might be a few of these in your life.

Bantay-salakayis describes a person who pretends to be good for personal gain. You might say that he or she is an opportunist. Its literal definition means "guard who steals."

Halang ang bituka literally means "someone with a horizontal intestine." That is a colorful way of saying a person has no moral compunction.

If you keep an open mind, you'll find that people will meet your slight knowledge of Tagalog idioms with smiles. Everyone finds it charming when a non-native speaker knows a few common sayings in their language. So, explore some more interesting Tagalog idioms and how they are used.

Agaw-buhay is a Tagalog idiom that literally means "to snatch life." However, it’s used to mean someone who is between life and death. You might think of the American idiom, hanging on by a thread.

Mabilis ang kamay is what you might call someone who is a pickpocket. Why? Because this phrase literally means "quick-handed."

When it comes to isulat sa tubig, it means to "write it on the water." However, in conversations, you’re saying you’re going to forget it forever. It's something you'll never mention again.

As far as idioms go, when someone says you are a bukal sa loob, or "pure-hearted", it’s a good thing. This means you are a sincere person.

Mandalas ang mata literally means you are sharp-eyed. This would be said about someone who is "good at finding or spotting things." Many moms and dads are sharp-eyed.

Someone known as a busy-body might be called makapal ang palad. The literal definition for this Tagalog idiom is "thick-palmed."

These are just a few of the many Tagalog idioms. If you're interested in further expanding your vocabulary, many educational websites such as the Center for Southeast Asian Studies at Northern Illinois University also provide listings of Tagalog idioms. You can also explore the most popular Filipino idioms to check out more examples in the different languages of the Philippines.