Salvete, omnes! That’s "hello everyone" or “hey, y’all” in Latin. You may have heard Latin is a dead language. Not so! Latin is fundamental to the vocabulary of millions of people. Even leaving aside Italian, Spanish, French, and all the other languages that evolved directly from Latin, many English words have their roots in the tongue of ancient Rome. Discover a great list of Latin vocabulary words, organized by part of speech. 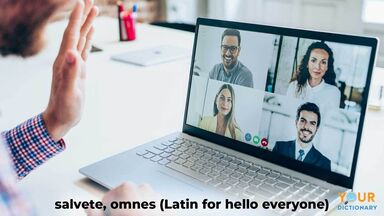 As you browse our list of Latin adjectives, you may have a bit of a familiar feeling. By various estimates, anywhere between 20 and 60 percent of English vocabulary comes straight from Latin. See how many derivatives you can pick out in the following Latin word list! (If you need a quick refresher on telling adverbs from adjectives, our examples of parts of speech are standing by.)

As in English, Latin adverbs are mostly adjectives with a special suffix at the end. Latin takes off the ending and adds -e. English does much the same with -ly. Happening in a happy way? That’s “happily.” Going down fast? That’s “quickly.” However, there are some unusual Latin adverbs you’ll want to memorize, because, like English, the weird adverbs are the important ones. Bene comes up every bit as often as the English word “well.”

A frankly absurd number of English nouns come from Latin. It’s a good rule of thumb that if an English word is longer than two syllables, there’s a good chance it’s from Latin, Greek or both. Yes, both: Latin borrowed many Greek words, then English pillaged Latin.

Examples of Latin nouns that start with the letters "a" through "f" include:

Latin nouns starting with the letters "g" through "l" include:

Latin nouns that begin with the letters "m" through "o" include:

Latin nouns that start with the letters "p" through "x" include:

English verbs don’t derive from Latin quite so often as nouns do. That’s because Latin is inflected and English isn’t. That is, Latin indicates what’s going on with a verb by its ending, while English generally does so by its place in the sentence.

Latin verbs that begin with the letters "a" through "f" include:

Latin verbs starting with the letters "g" through "m" include:

Latin verbs that start with the letters "n" through "v" include:

No Latin word list is complete without a selection of the many prepositions commonly used in the language.

There are several common conjunctions in the Latin language.

If you’re still struggling with bella lingua Latina (the beautiful Latin language), never fear. Nobody’s vocabulary is perfect, and there are lots of digital resources to help you out. To begin with, here are some Latin-English translators. They won’t do your homework for you, but they’re a great way to get past a tough line or two.

As for online dictionaries, a great Latin dictionary available online is by Lewis and Short, available through the Perseus Project or at LatinLexicon.org.

Latin in the 21st Century

Latin is almost 3,000 years old, still going strong, and the basis for the Romance languages. Studies show that learning Latin can improve your vocabulary (not to mention your SAT score). Latin is also part of the jargon in medicine, the sciences and law. We’ve brought together several lists of Latin vocabulary words, separated by parts of speech, for any novice just starting their studies.

For more everyday Latin, discover some common Latin words still used in English. Then, review root words to develop an understanding of the links between Latin and English. If you’re boning up on your Latin vocab for the SAT, have a look at 100 common SAT words.