List of Ways to Say Welcome in Different Languages

Some greetings are said universally all over the world. Welcome is one such word. Nearly every language on the planet has their own version of welcome used as a friendly or conversational greeting. To expand your lingual horizons, learn how to say welcome in different languages spoken in every continent. 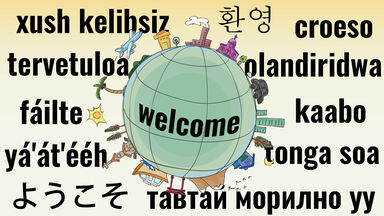 It's fun to learn new languages. And when it comes to learning a new language, ‘welcome’ is one of the first words learned. Whether you're interested in language learning or curious to see how greetings differ, explore the different ways 'welcome' is said throughout the European continent.

Middle Eastern and Asian languages don’t typically use the Roman alphabet. Instead, they might use Asian or Middle Eastern characters for their alphabets. For example, Hindi uses devanagari. Korean, on the other hand, uses the syllabic script hangul. Therefore, when discussing how to pronounce 'welcome' in these countries, we’ll use their pronunciation. Explore the different ways welcome is pronounced throughout the Asian continent.

From distinct tribal languages to the unique click languages of the bush people, Africa has some unique languages. While it would be exceedingly difficult to cover all the diverse languages in Africa, explore different ways to say 'welcome' in common African languages.

Just like Africa or Europe, different unique languages are found on the more than 2,000 islands around the world. Some of these ancient tribal languages have a long history like the Maori; however, other languages like Filipino have morphed from other distinct languages like Tagalog. Dive into how ‘welcome’ is said in several island languages.

While many languages found in North America and South America originated in other continents like Europe, there are a few native languages spoken. Find out how to say ‘welcome’ in some of these Native American languages.

When it comes to a new country, first impressions are important. Therefore, having a diverse understanding of how to say ‘welcome’ or ‘hello’ in different languages is important. Even if you know nothing else in the language, the person will realize you are trying to communicate in a positive way.

Plus learning words like ‘welcome’ in different languages can be your first step into becoming multilingual. To add to your greeting repertoire, you can learn to say ‘hello’ in 37 languages.