Idioms aren't just found in English. They are found all over the world, including in France. See how love and food can take on new meanings through French idioms. Explore some other common French idioms as well. 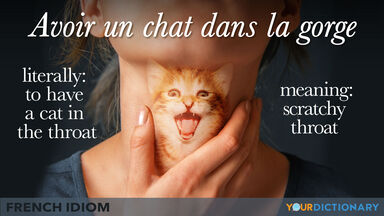 French expression idiom of cat in the throat
Advertisement

Fun French Idioms to Use in Conversation

Languages are chock full of idioms, and French is no exception. This ancient language has several fun idioms that go beyond their literal meanings. In English, you see fun idioms like dead as a doornail. However, in French, you have things like “have a cockroach” or “to look for the bug.”

Are you feeling a bit down? Then avoir le cafard is the perfect idiom to describe your mood. It means you are in a gloomy mood. However, literally, it translates to “to have a cockroach,” which would definitely make you gloomy.

A lot of people wake up in the morning with a "frog in their throat." Well, in French, if you say, avoir un chat dans la gorge, you have a cat in your throat. Whether it’s a cat or frog, your throat is still scratchy.

Literally, ça marche means "that walks." However, it’s a common expression you’ll hear people use in restaurants and general conversation to mean "that works" or "okay, that works."

You’ve probably split hairs a time or two in your life. To use this idiom in French, you'd say chercher la petite bête, which literally means “to look for the bug.” It totally makes sense, right?

It’s easy to have your head in the clouds or être dans la lune. And the literal translation is pretty relevant too, it means “be on the moon.”

Having a faire la grasse matinée is great for a Saturday morning. But what is it? Well in English, you can think of it as sleeping in. However, the literal translation is “to make a fat morning.”

When the weather is horrible, you can say, il fait un temps de chien! The literal meaning of, “it’s dog weather,” isn’t that far off either.

Ne pas être sorti de l’auberge means that you are not out of the woods yet. This is pretty similar to the literal translation of "not to be out of the inn."

When you are ready to lose your temper, then you can say péter un plomb. The literal translation of this French expression is "to blow the fuses." Pretty similar to the English version of "blowing a fuse."

Quand les poules auront des dents literally translates to "when hens have teeth." It's the French equivalent of "when pigs fly." So basically, you're saying it will never happen.

You might know a person or two that this French expression could apply to. Traîner quelqu’un dans la boue means to drag someone's name through the mud. This is actually pretty similar to its literal meaning of "dragging somebody through the mud."

Who doesn't like a good food idiom? Well, the French language has a few of them. And some are rather funny. Explore some common French expressions about food.

Aller se faire cuire un œuf has the literal translation of "to go cook yourself an egg." However, you would use this expression to tell someone to go jump in a lake.

The literal translation of some idioms can make you laugh, just like casser du sucre sur le dos de quelqu’un. This French idiom literally means “to break sugar on someone’s back.” However, when used in general conversation, it’s bad mouthing someone behind their back. Either way, it's not a good thing.

Life is definitely not easy. And if you want to say something is not easy in French try, ce n’est pas de la tarte. This phrase translates literally to mean "it's not pie." No, it is not!

Disasters are all around us, which is why there are so many idioms for them. C’est la fin des haricots is just one of them. In conversation, it means something is disastrous. However, literally translated you are saying, "it's the end of the beans." Now that's a bit of food for thought!

Sometimes things are just not as bad as they might seem. So, it's easy to make a mountain out of a molehill. Or in French, you could say, en faire tout un fromage. However, the literal translation of this common French idiom has to do with cheese, or "to make a whole cheese dish with it."

The French idiom être dans les choux is a play on the words les choux (cabbage) and échouer (to fail), so it means to fail or be in a bad situation. But the literal meaning is "to be in the cabbage."

If mustard were to go up your nose, you'd probably be angry, or at least uncomfortable. In French, you can say, la moutarde lui monte au nez when someone gets angry. But it literally translates to "mustard going up to his nose."

When you think about this French expression, it makes a lot of sense. Tourner au vinaigre literally translates to "turn to vinegar." But it means something goes bad. However, vinegar and bad things are both a little sour.

Who doesn't want to have one's cake and eat it too? Well, in French, it's less about cake and more about butter. Vouloir le beurre et l’argent du beurre has a literal translation of "to want the butter and the butter money too." You can't both eat the butter and sell it too!

Now it's time to talk about love! French is the language of love, after all. Dive into these idioms, you might use in a relationship for when you feel "love at first sight" or "get blown off" by a crush.

The literal translation of avoir un ticket avec means to "have a ticket with." However, love doesn't cost a thing. So when used in French, it means someone has seduced you.

"To be a blue flower" is the literal translation of être fleur bleue. But in conversation, it just means you are sentimental.

While the literal translation of poser un lapin means "to put down a rabbit," it's got nothing to do with rabbits when used in French conversations. Instead, it means you stood someone up for a date.

You've worked hard to find the courage to ask your crush out, only to get blown off. That is the common meaning of se prendre un râteau. However, if you look at it literally, it means "to take a rake." Well, getting blown off is very similar to getting hit in the face with a rake. It stings just as bad.

Idioms are interesting. It doesn't matter which language you are using. However, when it comes to foreign languages, like French, it can be hard to pick up on them. Now that you know some French idioms, check out a few fascinating idioms from other countries. You might also like to learn some beautiful French words.