The Sanskrit language is one of the oldest languages used and it has a history that dates back to 1500 BCE. This language has evolved over the years and there are certain variations that are reflective of specific time periods. Sanskrit is one of the officially scheduled languages of India, and it has evolved from Vedic form to Classical to its modern day usage. This particular language is considered to be an Indo-Aryan language that has had significant cultural influence throughout India and Asia. This particular language has always been highly lauded as it is considered to be the language of the divine. Even the word Sanskrit means "put together well."

History of the Sanskrit Language

When considering the development of the Sanskrit words it is important to note that this language has been in existence for thousands of years. It has evolved, reached its peak and has even had a decline.

Vedic Sanskrit is the oldest form of this language, and it is believed that it has been around since 1500 BCE which is when the Rig-Veda, one of the ancient Indian sacred texts, was established. This particular branch of the Sanskrit language is considered to be a language that consists of hymns, discussions of a theological and religious basis which is known as Brahmanas and the Upanishads, and incantations that are known as Samhitas.

Since the Upanishads are considered to be the very last part of the Vedic text, it is believed that it was around around 1 BCE when the Vedic language begin to evolve into the Classical Sanskrit period. The Classical Sanskrit is geared towards the age of the Hindu Epics, which is the period of significant development of poetic thought, sharing and learning.

Eventually, the use of the Sanskrit language, particularly in its oral form, decreased greatly. Many believe that the language suffered the same fate as Latin, dying out mainly because there were other languages that were becoming more popular. Likewise, Sanskrit also saw a decline because it was no longer being used by many of the strong political institutions.

Eventually, other competing languages would become more dominant making Sanskrit less pronounced. However, its importance is highly regarded amongst historians that consider Sanskrit to be one of the precursor languages to Indo-European languages that include English, Spanish, French, Italian and German just to name a few.

The development of sanskrit words also has its own history. Originally, Sanskrit was generally an oral language as the first recorded writings weren't noted until 1 century BC. As with all languages, there are formats that are followed for construction of words.

The phonics of Sanskrit consists of 48 sounds. The sounds are group into vowels, diphthongs, anusvara, visarga, plosives, nasals, fricatives and liquids. The vowels in Sanskrit are characterized by the use of Devanagari symbol which is a horizontal line that connects them to other letters.

Grammatically, Sankrit has ten groups of verbs that are separated into two large groups, which are the athematic and thematic. The tenses of the verbs are shown through present, perfect, aorist and future. The nouns do include masculine, feminine and neutral subjects and there are also singular, plural and dual number cases. Compounds are also used frequently within the Sanskrit language. There are four categories of compounds which include the:

These are just some of the compositions of the Sanskrit language.

Although the Sanskrit language is not as popular as it once was, it is still utilized in a variety of different ways. The language is often used in symbolic terms for a number of popular mottos in India, Nepal and Indonesia. These mottos are mainly in reference to educational or social institutions. The use of Sanskrit for this purpose is commonly compared to the use of Latin in the West by schools and law organizations for certain purposes. Likewise, many science and important government terms are written in Sanskrit as well. 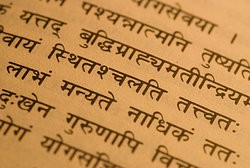