Both Scottish and Irish Gaelic are still active and living languages; however, their importance relates more to their cultural and historical significance than on the number of people who speak them.

Linguistically, Scottish Gaelic and Irish Gaelic are closely related, but speakers of one language are not likely to understand the language of the other. Additionally, there are distinct dialects spoken. For example, there are three dialects of Irish Gaelic:

The following words are given in the Munster dialect:

The online resources deal with various aspects of Gaelic words and, therefore, will be useful to varying people with diverse interests. Some sites are oriented towards Scottish Gaelic, while some are Irish Gaelic focused. Some have a linguistic aim, while others are geared towards the needs of the traveler.

Wherever your interest in Gaelic words stems from, you should be able to find information that is useful to you in the website references listed below

Other Ways to Study the Gaelic Language

There are many resources available to study Gaelic. Libraries and museums whose collections pertain to Scotland and Ireland will sometimes feature manuscripts or other historical information on Gaelic words. Explore some of the cultural institutions in your area, including the colleges and universities, to see if you can uncover more resources with which to study the Gaelic languages. 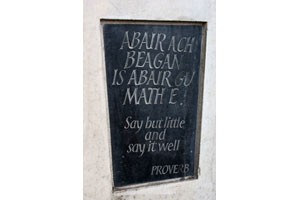