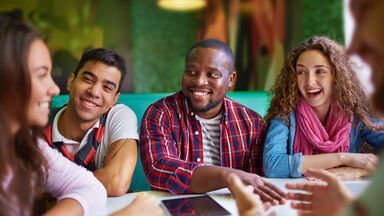 The Most Common Second Language Benefits

Historically, the motivating factor for learning a second language has been money. Languages spread and developed because of international travel and trade in port towns. These simplified languages, or pidgins, then evolved into complete language systems spoken by a wider range of people.

Modern economic benefits of learning a second language include:

As globalization increases, the old boundaries that separated language groups are becoming increasingly blurred by the relative ease of travel, advances in technology, and internationally focused economic systems. As a result, second language benefits have never been more valuable.

Languages are a vehicle for the free exchange of ideas. Whether it’s because you want to live in another country or you want to befriend someone from a different culture, knowing how to speak to each other is important. Here are some cultural benefits for learning a second language:

When people can communicate comfortably in a shared language, they naturally learn more about one another. The more they learn, the less they see one another as "others." Being able to exchange cultural information goes a long way towards forming meaningful bonds between communities.

Learning a second language allows you to acquire underlying linguistic knowledge. The acquisition of native languages is an involuntary process, prompting one to accept many of the rules of language form and structure without understanding them. When an individual learns a language later in life, the process is more conscious, academic, and theoretical.

Academic and linguistic benefits to learning a second language include:

In some parts of the world, children grow up surrounded by more than one language. They develop the ability to speak in multiple languages very naturally. Others grow up in monolingual places and find that learning a second language is more challenging. After childhood, the areas of the brain that are responsible for language acquisition become more fixed, and the process of picking up additional languages becomes more academic and less organic.

The First Step Toward Bilingualism

Learning a second language offers so many benefits and virtually no drawbacks. So why not get started now? Check out an overview of the five components of second language acquisition theory to find your best options toward bilingualism.