While the Shawnee language is now spoken by very few people, its long history still creates interest from scholars, anthropologists, historians, and those with ties to the Native American community. Originally spoken in what is now the Ohio River valley, Shawnee is now only active in a few areas in Oklahoma where some 14,000 Shawnee live after government relocation moved them from their traditional homes. 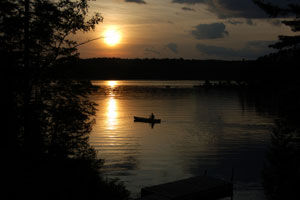 The Algonquian Family of Languages

The most identifiable feature of these languages is their polysynthetic morphology. Words in Shawnee and other Algonquian languages can be comprised of a very complicated series of sounds. This complexity allows some words in Shawnee to represent an idea or a concept that would require an entire sentence to convey in English. Shawnee also differs from English in another important aspect. Shawnee is primarily a VSO (verb-subject-object) language, meaning that verbs in sentences typically come before subjects. English, on the other hand, is an SVO (subject-verb-object) language.

The Shawnee language has a relatively minimalist phonology. Four short vowel sounds, four long vowel sounds, and thirteen consonant sounds are used. No matter how long the word, or how complex the word's morphology might be, the final syllable is always stressed when pronouncing words in Shawnee.

The following list of Internet resources further explores the complexity, history, and grammatical structure of the Shawnee language:

Those with a serious interest in the Shawnee language may also want to consider investing in the following books and audio CDs:

Other Places to Explore for Further Information.

Universities are institutions have long been indispensable in the preservation of languages. Often, colleges and universities have Native American language scholars employed as faculty. Depending on the region of the country the institution is located, the linguistics, anthropology, or history departments may also employ scholars who specialize in Shawnee language and culture. A quick Internet search of the faculty at universities in your area may uncover an expert in the field.