What Are Romance Languages? A Guide to the Major Five

There’s a big difference between “romantic language” and a “Romance language.” One uses a lowercase “r” and involves lovey-dovey smooches, and the other comes from the Roman Empire (hence the capital “R”). There are five widely spoken Romance languages in the world today, and while they can certainly be romantic, that’s not how they get their name. 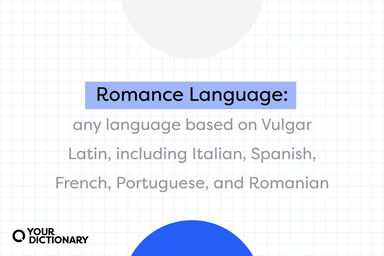 What Does “Romance Language” Mean?

Modern Romance languages are based on Latin. Specifically, they’re based on Vulgar Latin, a common, conversational form of Latin (as opposed to Classical Latin) spoken by soldiers in ancient Rome and spread throughout the Roman Empire. The word romance comes from the Latin ​​romanice (“a Roman language”).

What Are the Romance Languages?

Although the Roman Empire is long gone, its language lives on through the five most common Romance languages.

When you add them up, you get nearly one billion people on Earth who speak a Romance language. That’s almost one-seventh of the world’s population whose speech is directly related to ancient Rome and Vulgar Latin — a supposed “dead” language.

How Are Romance Languages Similar?

Italian is the most similar to its original language, as it shares 90% lexical similarity (common words and roots) to Vulgar Latin. That’s likely because modern-day Italy was the center of the Roman Empire, so the language didn’t need to travel far.

But Spanish, French, Portuguese, Italian, and Romanian share much of the same vocabulary as Vulgar Latin and Italian.

In other words, if you know how to speak one Romance language, you could easily learn one (or three) more.

While these languages are the most common Romance languages spoken today, they’re not the only ones. There are over 30 more languages with roots in Vulgar Latin, including:

Is English a Romance Language?

English has plenty of words that come from Latin and other Romance languages. Many important Latin legal terms are still in use today, and hundreds of words in the English language include Latin root words.

But English is not considered a Romance language because it did not come from the Roman Empire. English is Germanic, just like modern-day German, Dutch, Yiddish, and Afrikaans.

Look at the word book, for example — it’s not similar to the Latin liber, but very similar to the German Buch. For this reason, English speakers find learning German to be straightforward (and likewise for German speakers).

If you’re still having a hard time remembering the difference between romantic language and a Romance language (French is the language of love, after all), remember that Romance includes the Roman Empire, a proper noun that is always capitalized. When you’re referring to romance, the huggy-snuggly feeling of love, use a lowercase “r.”