“Yes” and “No” in Different Common Languages 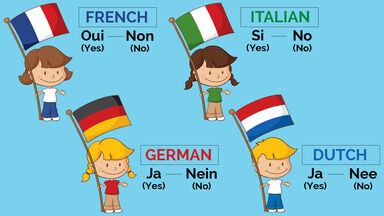 Yes and No in French, Italian, German, Dutch
Advertisement

How to Say Yes in 23 Different Languages

These are the standard ways to say “yes” in the most spoken languages in the world. Keep in mind regional and dialect differences may impact how you pronounce the word. The pronunciations are English phonetics.

How to Say No in 23 Different Languages

In many languages “no” is simply said as “no” or a very similar word starting with the letter “n.” Explore how they say “no” in some of the world’s most common languages.

Explore the World Through Languages