We use slang in English all the time. But, we aren’t the only language to use slang! Like English, Filipino slang is an ever-growing expansive list. Influenced by English and Spanish, learn 20 Filipino slang words and phrases that will have you fitting in with locals both online and in person. 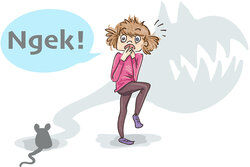 Ngek! is Filipino for Yikes!
Advertisement

Do you say “son of a gun”? It’s a common slang phrase that you see in English all of the time. Well, the Filipino equivalent is anak ng kamote or “son of a sweet potato”! Anak ng might also be used with tokwa meaning tofu or tinap meaning smoked fish. No matter what word is used with it anak ng _____ is used to express your annoyance with something.

A common phrase that you’ll come across in Tagalog is the word diba. This simply means right. It is typically used to ask a question, such as Yung jacket mo, diba? or, “That’s your jacket, right?” It might also translate into English as “is it not”.

This is a true Filipino slang term. When someone is called jeproks, it means that he is cool and laid back. It typically refers to someone that has a lot of street smarts or comes from the projects. To put the word jeproks into an English context, you might think of someone that is from the hood.

Have you ever had a moment where something is just so extraordinary that you can’t explain it or there just aren’t words? In Filipino, they have a word for that: churva. Instead of saying, “I have no words,” you can simply sum it up by saying, “Churva!” This Filipino slang word also works as filler when you can’t think of something else to say, “It was so… you know… churva?!”

“Okay” or “all right” is a common slang word used in English. The Filipino equivalent of these slang words is agik. You can even practice this slang word if you aren’t going to the Philippines and just use agik with your English friends. Who knows, it might just take off and be the new hip thing.

Are you the king of adding “jk” to your text messages? Then you might really enjoy the Filipino slang charot, which translates to “just kidding”.

You know that feeling that you get when you start to fall in love with someone? Your heart races, and butterflies dance in your stomach. Well, Filipino slang has a word to describe that: kilig. It describes that giddy first love feeling perfectly.

It’s time to eat y'all! Well, that isn’t a direct translation, but it’s pretty close. In Filipino slang, chibugan an means “eating time”. You might also think of it as “come and get it!”

Gigil is quite unique among Filipino slang words. It’s used to describe that feeling when you just want to squeeze something that is amazingly cute. You could definitely understand this feeling when you look at those baby cheeks, right?

If you hear someone say, “ngek”, then it is not a good thing. Ngek translates to “yikes” or “eek”! To remember this Pinoy slang word, you might think “Ngeek”.

Basta is actually a Filipino slang word taken from Spanish. However, in Tagalog slang, it means “just because”. For example, if someone is asking why they are doing something, the answer might be, “basta” (just because). You don’t have details but just know that is how you want it to happen.

If you want to think about what lodi means, then you just have to look at it backward: idol. Cool huh? Lodi is the slang word to describe something or someone you idolize or your idol.

When you say, “chika”, you’re simply asking “what’s up?” Similarly, you can also use the word chika to get the latest gossip.

Lots of Filipino slang words don’t have a direct translation into English. Hay naku is one of those phrases. However, you’ll find it used a lot to express exasperation, like saying “Uh oh” or “OMG!” For example, if your girlfriend tells you her boyfriend just broke up with her, a good response would be, “hay naku.”

You know that moment when your friend says something unexpected or rude, and you look at them saying “what the…”? You don’t need to add anymore because your meaning is quite clear. Well, ano ba? is the Filipino slang equivalent to the expression “what the?” in English. Now the next time, you can tell your friend, “ano ba?”

Anyare is a Filipino slang contraction for the words “anong nangyari?” The English translation for both would be, “what happened?” So, you might say “anyare sayo?” to mean “what happened to you?”

When it comes to English slang, there are a thousand different ways that you can say something is awesome or extraordinary. In Tagalog slang, you might say that something is petmalu.

What would life be like without your bestie? Seriously, what would it be like? If you’re in the Philippines, you’ll still have a bestie but they’ll be your beshie. You might even call them your bes or beh.

Everyone has done it. You’re in the middle of describing something, and you simply forgot what it is called. You know “that thing”. Well, it happens in the Philippines, too. The slang term for “that thing” is yung ano.

Susmariosep is a Filipino slang word that everyone can relate to. It means Jesus, Mary, and Joseph. As you can probably imagine, it is said in extreme frustration, “Susmariosep!” Give it a try!

Slang in any language is pretty fun. Just looking at the different words or word combinations that are created is always a unique and interesting journey. Now that you know a little Filipino slang, you might want to expand your knowledge of Tagalog idioms.