25 Most Beautiful Latin Words and Meanings

Some of the loveliest languages in the world trace their roots back to Latin. When you read some of the most beautiful Latin words and phrases, you can see why. Whether the ancient Romans were talking about nature, romance, or even something mundane, their language was nothing short of gorgeous. 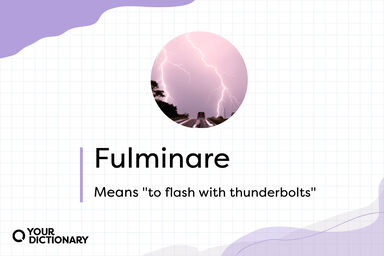 Strictly-speaking, the Latin word for "nature" is "naturae." However, there are some amazing Latin words for beautiful natural sights and experiences. When you read these gorgeous words and phrases, it's obvious that humans living in Ancient Rome appreciated the beauty of the natural world just as much as we do today.

The Latin word "fulminare" directly translates as "to flash with thunderbolts." It immediately calls to mind a stormy sky, filled with flashing lightning. Interestingly, this poetic term relates to the English word "fulminate," which means "to vehemently protest." You can imagine how a passionate argument is similar to a stormy sky.

The Latin word for a rain shower, "imber," does not have a modern English descendent. "Imber" is a useful Latin word, as it can also mean a shower of sleet or even a shower of missiles or arrows.

Watching a beautiful sunset is even more lovely if you can use the Latin word for the experience. "Solis occasum" means "the setting of the sun."

Directly translated, "lux brumalis" means "the light of winter." There's no corresponding English word. However, everyone who has noticed the way light changes with the seasons can understand the beauty and usefulness of this term.

In modern English usage, "aurora borealis" refers to the northern lights, an electrical phenomenon of nature in which the night sky lights up near the magnetic north pole. The direct Latin translation is "morning light from the north." The corresponding southern lights, near the south pole, also go by the name "aurora australis."

The Latin word "apricus," in addition to being fun to say, has a lovely meaning: "full of sunlight." It's directly related to the English word "apricate," which means to bask in the sunshine.

In Latin, the word "crepusculum" has the lovely meaning of "twilight." You may use a modern descendent of this word when talking about animals that are most active at dawn or dusk. As opposed to being nocturnal or diurnal, these animals are "crepuscular."

The Latin word for love is "amare," and there are few topics more beautiful than love. Unsurprisingly, the Latin language has a number of wonderful expressions that share the wisdom of ages past on this subject. These romantic sayings are perfect for wedding vows, tattoos, and more. They make it clear why the languages that come from Latin, such as French, Spanish, and Italian, are known as the "romance languages":

Directly translated, "manus in mano" means "hand in hand." However, the amazing thing about this phrase is that it speaks of the romantic bond just as powerfully today as it did thousands of years ago.

If you want to tell someone your love for them is forever, you can use a Latin phrase. "Aere perennius" means "more lasting than bronze."

Most people have heard of this Latin phrase, which is sometimes used in English. "Amor vincit omnia" means "love conquers all."

Will your love last forever? The beautiful Latin phrase "in perpetuum et unum diem" directly translates to "forever and one day."

If you're looking for a new personal statement or motto, why not turn to Latin? This language is one of beauty and power, and it makes for some inspiring expressions:

Optimism was valued, even in Ancient Rome. The phrase "dum spiro, spero" means "while I breathe, I hope." The idea is that as long as someone is alive, they keep hoping.

You've probably heard of this famous Latin phrase used in English. It's attributed to the Roman poet Horace. "Carpe diem" means "seize the day." This relates to making the most of the time you have.

If you need an inspiring quote for a graduation, nothing beats "alis propriis volat." It means "she flies with her own wings."

While words are powerful, action is often more powerful. The Latin phrase "acta, non verba" proves this has always been true. It translates as "actions, not words."

Have you noticed that when you teach something to someone else, you also learn things? The Latin saying "discendo discimus" means "by teaching, we learn."

Sometimes, people must have the persistence to endure hard times before they can reach success. The Latin phrase "ad astra per aspera" perfectly sums up this idea. It is translated as "through hardships to the stars."

Another star-themed inspirational quote is "astra inclinant, sed non obligant." It means "the stars incline us; they do not bind us." People are influenced by destiny, but they are not bound by fate.

No matter what kind of situation you encounter, there are some Latin vocabulary terms that can help. These beautiful words will come in handy.

Literally translated, "mellifluus" means "flowing with honey." It's related to the English word "mellifluous," which means a sound that is beautiful and sweet to hear.

The Latin word "susurrus" means "to whisper." It's a lovely word to say and is actually an example of onomatopoeia - a word that sounds like its action.

In a time when men grow magnificent beards, the Latin phrase "barba tenus sapientes" takes on new meaning. It translates as "wise as far as his beard."

There's no English term for the idea of something that is threatening without having a reason to be. The Latin phrase "brutum fulmen" eloquently expresses this concept, translating as "senseless threat."

The world is full of happy accidents or lucky failings, and the Romans had a term for them. "Felix culpa" means "happy fault."

A Latin word for positivity is another beautiful example of how this language can eloquently express complex concepts. The word "meliora" means "better things" or "things continuing to improve." The English word "ameliorate" derives from "meliora."

When you take umbrage with something, you express annoyance. This is loosely related to a beautiful Latin word. "Umbra" refers to shadows, ghosts, and darkness, but it especially means the shadows of trees.

A Dead Language With a Legacy

When you look at how beautiful the Latin language is, it's easy to see why it's considered the basis for the Romance languages. Even though Latin is no longer spoken and is technically a dead language, you can see Latin root words in English and many other languages still spoken today.