50 Beautiful Filipino Words and Their Meanings

When it comes to languages, they are all unique. The Filipino language offers several examples of beautiful words that are both fun to say and have powerful meanings. Explore 50 unique, powerful, cute and romantic Filipino words and their meanings. 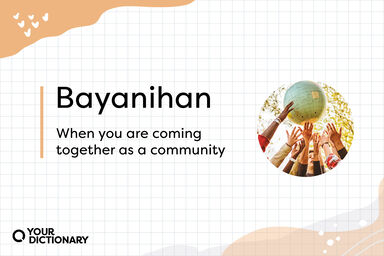 The unique Philippines language offers some powerful and inspiring words that are both beautiful to say and have powerful meanings. Dive into 15 powerful Filipino words and their English translation.

When you are coming together as a community, use the noun “bayaihan.” The term literally means “being in a bayan” (town), but it shows the true spirit of working together and cooperation. More people should definitely “bayanihan” to make the world a better place.

The noun “bayani” stands for someone who is a hero or patriot. However, this isn’t just a normal hero; a Filipino “bayani” knows that it’s important to use their bravery, courage and kindness to further the human race or the cause of the larger group.

The verb “Magmuni-muni” means to ponder, speculate, muse or even meditate on something. This is a deep contemplation of something big. You might “magmuni-muni” on the state of global warming.

In Tagalog, the verb “maniwala” means that you have a belief in something. This could be a belief in your nation or just confidence in what your friend is saying. For example, “Maniwalà ka man o hindî” means “whether you believe it or not.”

“Kinaiya” is a noun that describes your inner character. These aren’t just your good traits either. It is all the traits or characteristics that make you who you are.

As a noun, “maharlika” shows your noble character or that you are a noble warrior. The pronunciation of the word gives it an almost sing-song like quality.

To say your final goodbye or last farewell, you would use the noun “pakimakas.” However, if you are parting or saying farewell, “pahimakas” can be used as an adjective too.

You can’t talk about words with powerful meaning without talking about your fate. The noun “tadhana” is a Tagalog word showing something that will come to be or a destiny beyond your control.

Not only can “magkaugnay” be used as an adjective to show you are related to each other, but it also works to show an interconnectedness to someone.

To make a request or appeal, you would use the noun “pagsamo.” You can also use it for a request to a greater power through a prayer.

Are you looking to cut someone off from your life? Then, the verb “patid” would be your word of choice. This powerful Filipino word shows the ability to cut off.

When someone has hurt you or your feelings, you would “tampo.” You might withdraw your affection or sulk, so the verb works perfectly.

There isn’t anything more powerful in the world than acting, and there, the noun “yugto” has you covered. It could also be a stage in your life or a period of development.

Something that is blocking or hindering your enjoyment is a “balakid.” This powerful noun shows an obstacle that is obstructing your progress or success.

While some Filipino words have powerful and inspiring meanings, others are just beautiful to say. While their meanings are short, the words themselves just ring in the language. Check out 10 Filipino words that are fun to say.

Nothing in the world is more beautiful than love. Explore the beautiful romantic sound of love through 15 romantic and relationship Filipino words.

“Sulit” is an adjective that shows something is worth the effort. You might think of how a loved one is worth all the effort despite difficult times. You might also use “sulit” to say that something has value.

You can’t have a list of beautiful Filipino words without including the verb “magmahal,” or “to love.” Curiously enough, this word also has a second meaning: to become expensive. When you love something, does it become priceless?

Going right along with love is beauty. The adjective for beauty in Filipino is “maganda.” You might use this word for someone or something that is not only beautiful, but cute and even nice.

“Marahuyo” functions as a verb in the sentence showing enchantment or to be enchanted by someone. It can also be used to show that you are attracted to someone.

Do you have a “tinatangi” in your life? This noun is someone who is special to you.

Going right along with “tinatangi,” a “dayang” is a darling. It could also be used for a princess or a noble lady. What a great noun to make your girlfriend feel special.

You know those butterflies you feel in your stomach when you see your crush? The Filipino language has a way to describe this experience through the verb “kilig.”

When you are extremely fond of someone to the point of obsession, you might use the noun “humaling” to describe your feelings. What a great word for first love.

A great way to win your crush is through a “harana.” This noun is to woo or serenade them. Think Heath Ledger in the movie 10 Things I Hate About You.

When you serenade your lover, you might use a love song or “kundiman.” This noun is used for native or traditional Filipino love songs.

There is nothing more romantic than lying down with your partner to sleep. The Filipino language has a beautiful verb for that: “siping.”

Most of us would describe your special someone or lover as gorgeous. In Filipino, you would use the adjective “makisig.”

“Sinta” is a noun that can have a couple of different romantic meanings. You might use this to show love between two people or to tell or show someone is your sweetheart. Isn’t “sinta” sweet?

Love isn’t just between your sweetheart and you, it can also be between a parent and a child. “Aruga” shows your tender nature, acting as the verb to show nurturing.

Now it is time for some fun words that you might enjoy. These 10 beautiful words are just unique in their structure and some are even uniquely Filipino.

The Beauty of Language

Every language has a few words that are just beautiful. The moment that you hear them, you wonder about their meanings. Now that you’ve looked at 50 beautiful Filipino words, try exploring 25 of the most beautiful Latin words and their meanings. Who doesn’t love words like aurora borealis?