60 Modern Words and Their Meanings Now in a Dictionary

Every year, the dictionary adds new words in English. These words can come from politics, psychology, pop culture, or current slang. Check out 60 modern words that were new to the Oxford English Dictionary and the Merriam-Webster Dictionary in 2019 and 2020. We’ve also included example sentences to illustrate how they are used. 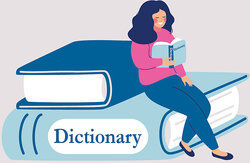 Teenagers are usually ahead of the curve when it comes to modern colloquialisms. The literary world can now catch up with the modern words for cool with these helpful dictionary additions. Here are some words that are essential to know in the 21st century.

The world needed some new words to describe political life in 2019. Some words, like caucus, were a long time coming, but other words are more modern terms for political situations.

The second decade of the 21st century taught us more about ourselves and other people. The field of psychology has faced new challenges and insights, many of which are reflected in the new dictionary words of 2019 and 2020.

Popular culture always influences a population’s vocabulary. Here are some ways that film and television have added words to the dictionary this year.

Business Words and Their Meanings

The 2008 recession affected more than the business and finance sector – it changed the way the world talks about work. At the risk of mentionitis, check out these new business-related words that now appear in the dictionary.

Even a written dictionary can’t escape 21st-century technology. Words that describe technological advances in the last several years can now be found alongside more traditional words in the dictionary.

New Insults in the 21st Century

Want to insult someone in the most modern way possible? Check out these 21st-century insults that are now available to learn in an everyday dictionary.

Don’t stop now – there are lots of ways to improve your vocabulary! Try out these tips that help you add words to your everyday speech. You can also choose vocabulary strategies that best fit your learning style.