5 Basic Parts of Any Map

Every map is unique, but most have at least five main components in common. From the title to the compass rose, each part tells you something about how to read the map. Learn what each map part is and what it means so you can find your way. 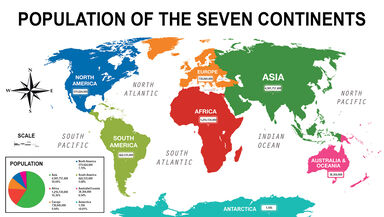 5 basic parts of any map
Advertisement

The title, also called the heading, of a map is typically found at the top of the map. It tells you exactly what the map is showing. The title will be in a large font and describe in detail what the map is for.

All the map symbols are defined in the map key, or map legend. The terms “key” and “legend” are often used interchangeably, but some maps have both a key and a legend. In these instances, the key includes the symbols while the legend includes things like the scale and compass rose.

The symbols on a map make it easier to read because the map is not crowded with words. The key is usually off to the side of the map and tells you what each symbol stands for.

A scale often looks like a bar or line with numbers evenly spaced out. It will tell you what distance on the map equals what distance in reality. For example, one centimeter on the map might equal one mile in the real world. You may need to know common measurement abbreviations to read the scale.

A map’s grid is a series of imaginary horizontal and vertical lines drawn onto the map. These lines may represent actual latitudes and longitudes or they may just split the map into smaller parts. Grid lines will be labeled at one end or each end.

The orientation of a map is important to know, so a tool that shows you the cardinal directions, or at least which way is north, is included on most maps. You may see an arrow labeled “N” for north, or you may see a compass rose. A compass rose looks like a big star and shows north, south, east, and west.

Other Common Parts of a Map

Because each map is unique, it’s hard to identify the basic parts that appear on every single map. You may see examples of the three main parts of a map or even five, six, or eight main components of a map.

The Making of a Map

Learning the basic elements of a map helps you read existing maps and create your own maps. Whether you’re creating a fantasy map for the fictional world you created or reading a map on a trip, understanding these map parts will take you to amazing places. If you enjoy learning about mapping, you might also like to explore the 5 themes of geography.