7 Basic Parts of a Computer and What They Do

No matter a person's age, it’s important to understand the basic parts of a computer. Learning the names and functions of these seven main computer components will help new and young technology users to communicate effectively with others about the tasks they are using a computer to perform. 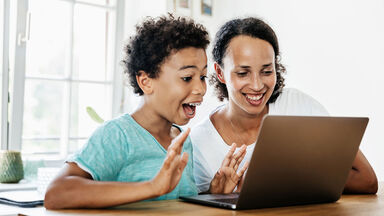 A computer’s central processing unit (CPU) is inside a computer. While it’s not something that you actually see while you’re working on the machine, it’s where the work gets done. The CPU is what allows the computer to function. It uses instructions in the software that is installed on the computer, or that the computer is accessing via the cloud, to execute tasks. Processor speed impacts how quickly tasks can be performed. This computer part is sometimes referred to as the device’s brain.

RAM is the acronym for random access memory, which represents a computer’s short-term memory. When a computer is actively performing a task, the device is using RAM to do so. If you enjoy watching movies or videos on your computer or you tend to keep a lot of applications open at the same time, then you will want a computer that has a lot of RAM. The less RAM a computer has, the fewer tasks it can perform at one time and the slower each task will be.

A keyboard is an input device. It allows a computer user to issue commands to the computer by entering letters, numbers, special characters, or functions. Laptop computers have a built-in keyboard while desktop models typically have one that attaches via a USB cable or that connects wirelessly to the computer.

A computer’s screen is the area where information is displayed to the end user. It is the face of the computer’s monitor. The screen is built into a laptop but is a separate device for desktop systems. If you are using a word processing program, the information you type will appear on the screen. If you are using a computer to play a game or watch a movie, that's what shows on the screen.

Now that you know the basic parts of a computer, consider expanding your technology vocabulary by mastering other key computer terms. Once you are comfortable with those words, further explore the language of technology by learning some common computer and information technology abbreviations. You’ll be on your way to sounding like an expert end-user in no time.