The Ins and Outs of Math Terms: A Glossary

Believe it or not, there are a lot of words in math — and if you don’t know them, it’s going to be hard to work with the numbers they describe. An understanding of basic math terms goes a long way, no matter if you consider yourself a “math person” or not. 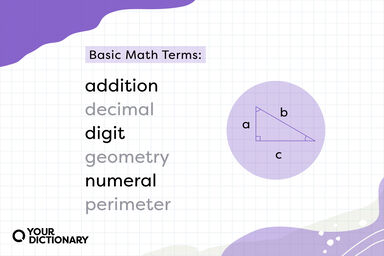 Counting and quantities are building blocks to higher math skills, such as order of operations and geometry. Terms found in a counting and cardinality list include:

Addition, subtraction, multiplication, and division are known as the order of operations. Students need to know the basic terms for these skills, including:

Basic number and operations concepts include base ten, fractions, place value, and decimals. Math terms in this glossary category include: