The Beehive State: Why Does Utah Have This Nickname?

Beehives are part of Utah's identity as a state, so much so that there is a beehive pictured on the state's official seal and flag. Discover the meaning behind the beehive and how it relates to Utah. 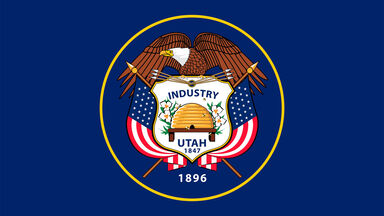 Why Is Utah Called the Beehive State?

When you think about a beehive, what comes to mind? Do you visualize a home populated by hard-working, industrious beings who live and work in a supportive community? That image is the ultimate answer to the question of why Utah is called the Beehive State. Hard work and industry have defined Utah since long before it became a state.

Industry of the Early Settlers

Utah was settled in 1847 by the Church of Jesus Christ of Latter-day Saints (LDS church), also known as the Mormon Church. Following years of religious persecution in Illinois and the murder of their founder and prophet, Joseph Smith, 148 Mormons headed westward across the treacherous Rocky Mountains in search of a place to call home. These settlers made their new home in a largely unpopulated area called the Great Salt Lake Valley, then part of Mexico, with little to no access to raw materials and a harsh climate. They relied on their faith and industry to survive. That is what a beehive truly represents. By the time Utah was granted statehood in 1896, the LDS church had grown to 250,000 people, and today there are more than 2 million Mormons in Utah.

Religious Symbolism in the Book of Mormon

The industry of Utah's settlers isn't the only factor relevant to the symbolism of the beehive. Beehives have been used to symbolize connectedness and hard work in religious imagery for millennia. The Bible calls the Promised Land the “land of milk and honey,” and the Book of Mormon references honeybees. The earliest people discussed in the Book of Mormon went into the wilderness en route to a place to live near the water. They took with them livestock, seeds, and swarms of deseret, which translates to "honeybees."

What Utah Was Almost Called

The journey referenced in the Book of Mormon was very similar to the experience of the Mormons who originally settled in what would become Utah. Due to this similarity, the first name proposed for the state was actually Deseret.

Ultimately, the name Deseret did not endure because Congress favored the name Utah, which was derived from the Ute tribe, an indigenous people. The area was granted statehood in 1896 and named Utah. While the word Utah does not mean honeybee or beehive, these items continue to have a prominent place in Utah's story and symbolism.

Other Nicknames for Utah

In addition to the Beehive State, Utah has several other names. Most of these names reference Utah’s Mormon history.

The beehive is a prominent image in Utah's state government. The beehive is meant to symbolize perseverance, industry, thrift, and collaboration. It's also an important symbol in the Mormon faith, which remains the predominant religion in Utah.

Each state has a rich and fascinating history. From state abbreviations (Utah's is UT) to nicknames and beyond, there are so many interesting tidbits to learn. Start by finding out which state is referred to as The Keystone State. From there, dig even deeper to reveal which state's nickname is the Pine Tree State. You just might be amazed by what you uncover.