Can an Impeached President Run for Office Again?

If an American president is impeached, can they run for office for a second time? The answer depends on the impeachment process and the actions taken by Congress. Keep reading to learn more about the process of impeachment and answer the question, "Can an impeached president run again?" 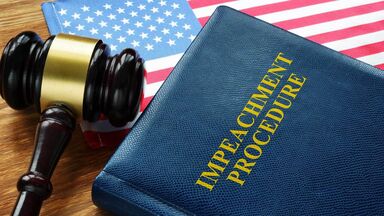 Impeachment is a form of checks and balances provided in the United States Constitution that allows Congress to remove "the President, Vice President, or other CIvil Officer" before their term is over. According to Article I in the Constitution, the House of Representatives and the U.S. Senate must decide whether election officials have committed "Treason, Bribery, or other high Crimes and Misdemeanors." In other words, whether they have committed an abuse of power or misconduct, not necessarily a violation of a criminal statute.

Once the official has been accused of misconduct, the impeachment process begins. The steps for impeachment are as follows:

Note that the House and the Senate have different roles in this process. If the House votes by majority to impeach, the official is impeached. The Senate then votes whether to convict, but they have no say in the official's initial impeachment.

Is It Legal For an Impeached President to Run For Office?

The question of whether an impeached president can run for office again is an unprecedented one. Once a president has been convicted by the Senate, Article I, Section 3 of the Constitution says:

"Judgment in Cases of Impeachment shall not extend further than to removal from Office, and disqualification to hold and enjoy any Office of honor, Trust or Profit under the United States: but the Party convicted shall nevertheless be liable and subject to Indictment, Trial, Judgment and Punishment, according to Law."

The phrase "disqualification to hold and enjoy any Office of honor, Trust or Profit under the United States" indicates the Senate has the option to decide whether an impeached president can run for public office again. It is not an automatic part of the impeachment process; rather, it is one sanction the Senate can use against an impeached person. Presidents who have been impeached by the House and then acquitted by the Senate are not affected by this penalty.

What Presidents Have Been Impeached?

Another president, Richard Nixon, faced impeachment charges following the Watergate scandal in 1973. He resigned on August 9, 1974, after articles of impeachment for obstruction of justice, contempt of Congress and abuse of power were brought to the House of Representatives.

Other Impeachments in American History

The term impeachment is typically associated with presidents. But of the 20 individuals who have been impeached, only three of them were presidents. The other officials have included United States Senator William Blount, Associate Justice of the Supreme Court Samuel Chase, Secretary of War William W. Belknap, and fourteen federal judges. There have only been eight Senate convictions in these cases, and they were all federal judges.

Can a President Be Impeached Twice?

Theoretically, if a president is impeached by the House but acquitted by the Senate, they can be impeached again as was the case with Donald Trump being impeached in 2019 and 2021. According to Double Jeopardy Clause of the Fifth Amendment of the Constitution, no individual can be tried twice for the same crime. A president must therefore commit a completely new act of misconduct or abuse of power in order to be impeached again.

The Power of Democracy

Impeaching a president is a serious task, and can be politically dangerous for elected officials. However, the Founding Fathers bestowed the power of impeachment upon the legislative branch for a reason: the defense of democracy. Learn more about the powers of the national government under the Constitution. You can also learn more about the democratic system by comparing different types of government around the world.