The Canuck Conundrum: What Does It Have to Do With Canadians?

Canuck — that’s the Canadian hockey team, right? Or is it a rugby team? Well, you’re not wrong, but a Canuck is more than the name of a sports team (or two or three); it’s a name frequently given to Canadians in general. The word Canuck has been slapped on Canadian national symbols from sports teams to superheroes. The meaning and history of Canuck are as rich and textured as authentic Canadian maple syrup. 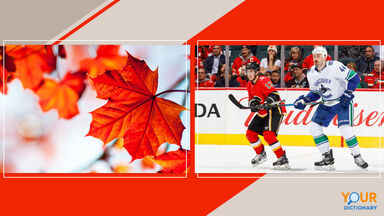 The Unlikely Origins of Canuck

Like a barista at Starbucks asking whether someone’s name is spelled with a “C” or a “K,” you may be confused about how to address the C/Kanuck in your life. Historically, Kanuck with a “K” was used to refer to Dutch Canadians and German Canadians or French Canadians. The spelling with a “C” became popular in the 1850s, and nowadays Canuck is by far the most popular spelling. After all, you wouldn’t spell Canada as Kanada, would you? There’s more to this etymological tale than meets the eye.

The most popular theory — and, let’s face it, the most boring — is that Canuck is simply a combination of Canada and Chinook. Chinook can refer to several Indigenous groups in the Pacific Northwest who speak Chinookan languages. Sounds plausible, but things are rarely that simple.

A second theory holds that Canuck, like the name Canada itself, came from the Iroquoian word Kanata. The story goes that during the French explorer Jacques Cartier’s expedition up the St. Lawrence River in 1535 he was accompanied by two Iroquoian boys. The boys pointed out the chemin de kanata — meaning “route to the village.” Cartier scribbled the word in his journal and described the region as the “Kingdom of Canada.” The name Canada then appeared on a world map in 1547. According to this theory, Kanata put the Kan- in K/Canuck. However, there are other theories.

Canada is a cultural mosaic of many different cultures, so at some point or other, a lot of foreign words have been thrown into the transcontinental stew. Some have suggested that Canuck may actually come from the Irish name Connaught. Another possibility is that it was inspired by the German word genug meaning “enough.” While Canuck may sound like these foreign words, there is no hard evidence for any of these theories. In fact, the origin of Canuck may not come from Europe or the American mainland at all.

In recent years, historians and linguists have posited the theory that Canuck may trace its roots to the Hawaiian word kanaka, meaning “human being.” During the 19th century, Hawaii’s economy was kept afloat by whaling, and sailors from Hawaii and other Polynesian islands found employment on American and Canadian ships. In 1883, kanaka was used to describe Hawaiians:

“There are a few Hawaiian words introduced by the Kanaka sailors on the whaleships.”

The word kanaka doesn’t appear to have been limited to Polynesian sailors; it may have been used to describe foreigners in general, particularly anyone with a darker skin tone. This applied to many French Canadian or Canadien people, many of whom had mixed French and Indigenous ancestry. Over the years, Canuck came to be applied to anyone and anything Canadian.

Can You Call a Canadian a Canuck?

Canadians are famous for their politeness, but that doesn’t mean that they haven’t had their share of insults thrown their way. Canuck was originally used to describe or categorize a Canadian, and in some cases, it may still be used and taken as an insult. As with anything, context is key, so be sure to ask before you call a Canadian a Canuck.

Johnny Canuck — the Man, the Myth, the Lumberjack

Occasionally, someone from the U.S. might call a Canadian a Canuck (affectionately or otherwise) out in the wild. Ironically, Canadians have Uncle Sam to thank for Canuck going mainstream: The fictional lumberjack Johnny Canuck started out as the Canadian response to America’s goateed, pointy uncle. The earliest depictions of Johnny from 1869 usually showed him as the mustachioed younger cousin of his American counterpart or of Britain’s John Bull. Unfortunately, poor Johnny was often depicted as “simple-minded” and the victim of his counterparts’ bullying.

However, Johnny made a stylish (when he’s wearing a shirt, that is) comeback during World War II, taking on the image of a Canadian Captain America punching Nazis and taking names. Nowadays, Johnny is the logo for the Abbotsford Canucks hockey team and has appeared on the alternate jersey for the Vancouver Canucks. In contrast to his early mustachioed or Nazi fighting days, he can now be seen rocking a lumberjack chic look with a beard that would fill any No Shave November participant with envy.

The Canuck pride doesn’t end there. Canuck has seen plenty of action over the years, whether in the pages of a comic book or on real-life secret missions.

If you call a Canadian a Canuck, then what do you call people from other countries, states or cities? Learn the names of a few groups of people here: