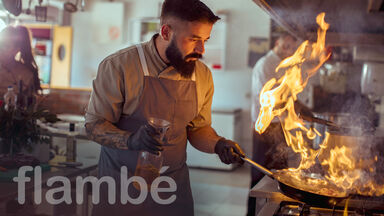 Common culinary terms include everything from cooking methods to fancy French cooking words.

Each cooking method requires a specific type of heat, temperature, or technique.

While you’re cooking with various methods, you may come across these typical cooking terms.

There are over a dozen different ways you can take ingredients apart or cut them.

Baking is one type of cooking that has a whole set of terms to itself. Whether you’re baking cakes or making bread, these terms will come in handy.

If you’re trying out some fancy cooking, you might need to know these common French cooking terms.

Simple explanations of normal cooking terms can take you from kitchen disaster to home chef. Continue your culinary learning by exploring cooking measurement abbreviations and conversions.