A consonant classification chart shows where the different consonant sounds are created in the mouth and throat area. This is important, especially when trying to help children or adults learn to speak properly if they have speech problems. 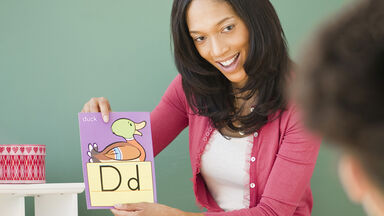 To understand what a consonant classification chart is, you can see one online from the International Phonetic Alphabet (IPA) website or in a linguistics textbook. For the non-linguist, this chart can be difficult to read and understand.

The purpose of the chart is to show where in the mouth different consonant sounds derive and how much air is needed to create the sounds. For this reason, the chart often has the location of the sound (place) across the top and the way the sound is produced (manner) down the side.

Keeping a printable consonant classification chart can be useful for long-term language learning. You can print the chart image to keep as a reference tool.

The place of articulation describes where the sound is made.

Bilabial - You use both lips to create the sound, such as the beginning sounds in “pin,” “bust,” “well” and the ending sound in “seem.”

Labiodental - This uses the lower lip and upper teeth. Examples include “fin” and “van.”

Dental/interdental - This creates sound between the teeth, like in “the” and “thin.”

Alveolar - You create sound with the tongue and the ridge behind the upper teeth. Examples include the beginning sounds of “tin,” “dust,” “sin,” “zoo” and late and the /n/ in “scene.”

Palatal - This uses the tongue and the hard palate to create the sounds in “shin,” “treasure,” “cheep,” “jeep,” “rate” and “yell.”

Velar - This makes the sound using the soft palate in the back of the mouth. Sounds include those in “kin,” “gust” and the -ng in “sing.”

Glottal - This is a sound made in the throat between the vocal cords such as in the word “hit.”

Nasals - As expected, the air is stopped from going through the mouth and is redirected into the nose. Voiced examples include “seem,” “seen,” “scene” and “sing.”

Liquids - Almost no air is stopped here. Voiced examples include “late” and “rate.”

Glides - Sometimes referred to as "semi-vowels," the air passes through the articulators to create vowel-like sounds even though the letters are known as consonants. Examples include “well” and “yell.”

While learning how to use a consonant classification chart can be a challenge, it is a useful tool to have in your language learning arsenal. When you’ve mastered this chart, continue exploring the IPA by gaining an understanding of the IPA vowel sounds chart.