Get to Know Large Numbers: Names and Expressions

What's the biggest number you can think of? Chances are, it has a lot of zeros in it. But what are the names of very large numbers, and how much bigger are they than ordinary numbers? Keep reading to get to know the largest numbers in mathematics and the best ways to express them. 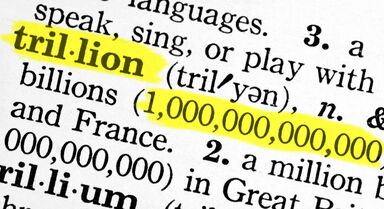 One million sounds like a big number. But in the world of big numbers, one million is the smallest number of all! For every three zeros you add after 1,000,000, the name of the number changes. Check out the names of large numbers past one million. Notice that using scientific notation is a very effective way to write these large numbers without listing dozens of zeros.

Once you get to a decillion, you're dealing with a number that has 33 zeros! It's unlikely that you'd encounter any amount of items that are so numerous as an undecillion in your daily life. However, scientists and mathematicians rely on having names for large numbers for their calculations.

You may be wondering if numbers can even get bigger than a decillion. Don't worry — they can! Take a look at the names of these very large numbers that you get by adding three zeros to the end of the one before.

While a centillion is the largest -illion number, it's not quite the largest number that has a name. A googol has 100 zeros, and a googolplex has googol zeros — basically, ten to the power of googol. These numbers are too big for even mathematicians to fathom, as neither googol nor googolplex are words in formal mathematical use.

Are you wondering if "zillion" is missing from the above list? What about "jillion" or "bagillion"? They're not missing because they're not real numbers. They're placeholder words used to mean very, very large numbers. Another fictitious number is affectionately known as "Sagan's number," which denotes a large number equal to "billions and billions" (a phrase used often by astronomer Carl Sagan).

Sometimes it can be difficult to imagine these huge numbers in the context of our real lives. Check out these interesting facts about the largest numbers in mathematics to help you make more sense of them.

The beauty of math rests in how predictable it can be. Even in the case of large numbers, seemingly unfathomable numbers can be remarkably predictable. For more math writing practice, learn the rules for writing numbers. Or, if you're interested in learning more about math and how it works, check out these examples of rational numbers.