How a Map Key Works

When reading a map, it’s important to know what all those little symbols mean. That’s why you need a map key – and why you need to know how to read a map key. Discover how a map key works and to see examples of symbols you may see in a key. 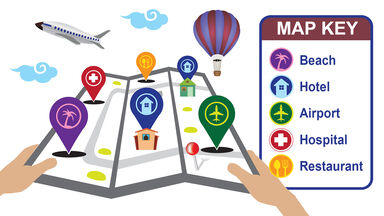 A map key helps a reader understand how to read a map. Typically, it lists symbols that can be found on the map along with what they mean. A blue square may indicate a type of building, while a green triangle may represent a forest. The map key also includes the map’s scale; for example, one inch on the map may actually be one mile in the real world.

Some maps differentiate between a map key and a map legend. These terms are typically used interchangeably, but sometimes a map includes both a key and legend. In these cases, the key contains the list of symbols used on the map, and the legend includes the scale, abbreviations, and compass rose to show the cardinal directions.

Common Symbols on a Map Key

While most maps are different from each other, some symbols can be commonly found in the same kind of map. City maps tend to use similar symbols, for example, while those same symbols on a topographic map may mean something else. Check out these common symbols and see how many you can recognize.

When navigating a city, you’ll want to know the difference between roads, highways, and other parts of the town. A good map key can help you find your way around any city, even when you don’t know the exact location. Some common symbols found on a city map include:

You may see all of the above on a road map. However, when you’re driving, you’ll often want to look for features on a map that provide food, gas, lodging, or a restroom. You may see these symbols on a road map:

Examples of political maps can be found in an atlas. These maps often include differently colored countries, border lines, and basic geological features. Here are some symbols that you’re likely to see on a political map:

The Value of Travel

Now that you know how to read a map key, increase your map-reading skills further by learning the different parts of a map. Then there’s nothing standing between you and your next travel adventure! Traveling not only helps you practice your map navigation skills, but it can also open your mind to the world around you. Get inspired by these thoughtful quotes about traveling.