How Long Is a Generation? Today and In History 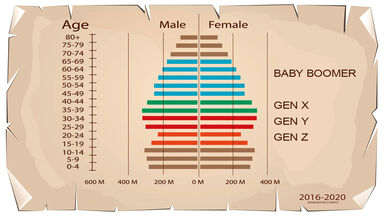 Length of a Family Generation

This concept is the same today as it’s always been. In the family genealogy context, generation is defined as:

“a single degree in the succession of natural descent.”

For example, a parent would be one generation and their child would be another generation. A family generation lasts about 20-30 years, because that is the age when most people from one generation begin to have children. You can see this illustrated on a family tree.

Length of a Social Generation

In the social context, generation is generally defined as:

“a group of people who were born and lived or are living around the same time.”

It is viewed as the average time it takes for a generation to be born, grow up, and have children. Pew Research Center notes that a generation includes a group of people born over a 15-20 period.

As you can see, calculating how long a generation lasts is not an exact science, and there’s no simple formula. If you look at the generally recognized generations, you could say there have been 6 generations in the last 100 years between 1920 and 2020: GI Generation, Silent Generation, Baby Boomers, Generation X, Millennials, and Gen Z.

Grouping people by generations is one way to group them based on age. These groups are shaped by the world they live in and typically have similar attitudes or behaviors.

The generation lasts from birth to death, so it’s length varies by individual. Prior to the late 1900s, people weren’t viewed in social generations like they are today.

There is no standard system for defining how long a generation lasts, what years a generation was born and ends, or how the generation gets its name. Popular generation names used today were often coined by journalists and writers.

The best way to see how long a generation lasts is to look at the popular generations recognized today.

Experts generally agree the GI Generation includes all people born in 1924 or earlier. This group has also been called The Greatest Generation, a term coined by Tom Brokaw in a 1998 book describing those who lived through the Great Depression and fought in WWII.

A 1951 Time Magazine essay coined the term The Silent Generation, which includes people born from 1924-1945 or 1925-1942 depending on the source. This generation spans roughly 17 years.

Boomers I or Baby Boomers

This generational term is the only one used by the U.S. Census Bureau. They say Baby Boomers are those born between 1946 and 1964, so the generation spans 18 years.

Douglas Coupland first used the term Generation X in a book in 1991, but they have also been referred to as The Lost Generation. People born between 1965 and 1980 are considered Generation X, making this generation span 15 years.

Also called Echo Boomers, this generation includes people born between 1981 and 1996. In 1993, advertisers started using the term Generation Y to describe this group, but the term Millenial became more popular and is the term used today.

Gen Z is the most recent generation identified and was almost called iGeneration. In 2019, Pew Research Center decided to use Gen Z as the official term. Gen Z includes everyone born from 1997 to the current year.

He argues that as the world advances, it makes sense to cut the generational boundary to a 15-year maximum. McCrindle also hopes this naming strategy will stick and every 15 years there will be a new generation named successively with Greek alphabet letters.

People throw around generation terms all the time, but the definitions of generational words are often vague. Learn more about generational differences by exploring things like cool words from the 1970s or facts about U.S. presidents from different generations.