Intended as a fun language game for children to enjoy, learning Pig Latin isn’t a difficult task. There are just a few basic rules to keep in mind when you’re learning how to speak Pig Latin. The rules for translating words vary based on the number of syllables and types of letters. 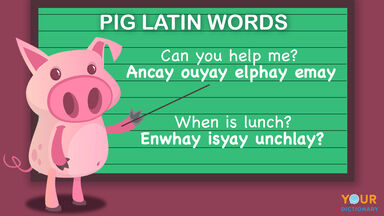 how to speak pig latin words

Words That Begin With a Consonant

To translate the word dog, use this pattern:

Words That Start With a Consonant Cluster

Words that begin with a consonant cluster start with a pair of consonants. Plant is an example of this type of word. These words follow the same pattern as words that start with consonants, with one exception. The first two letters of the word are moved to the end rather than just the first letter. The -ay suffix is still added to the end.

To translate the word plants, use this pattern:

Words That Begin With a Vowel

Pig Latin Example: Am to Amyay

The English word am becomes amyay in Pig Latin.

For compound words, which are words formed by combining two or more smaller words into a new word with a different meaning, an extra step is required. You’ll need to separate these words into the individual words that have been combined and apply the rules of Pig Latin to each one.

Special Case: Words That Include a Y

There are some special Pig Latin translation considerations for words that include the letter "y," which sometimes functions as a consonant and sometimes as a vowel.

Now that you understand the pattern of turning everyday words into Pig Latin terms, get comfortable applying the rules to some common sayings. Find a partner to practice with so you can polish your Pig Latin skills and have someone to interact with using this new (to you) way of communicating.

Have Fun With Pig Latin

Learning Pig Latin is a fun way for kids to enjoy communicating with their friends. It’s not a super-secret code that no one else will be able to decipher, nor is it a real language. It is a fun activity that can also be educational. By learning the rules of Pig Latin, kids will be able to practice their language arts skills and enhance their ability to think in a way that prepares them to master the basic rules of grammar. If you find Pig Latin fun and beneficial, you may also want to explore some examples of gibberish.