Metric System vs. Imperial System: Differences and Use

The imperial system and the metric system are two different measurement systems for things like distances, volumes, and weights. Since all countries in the world don’t use the same measurement system, it’s important to understand both. 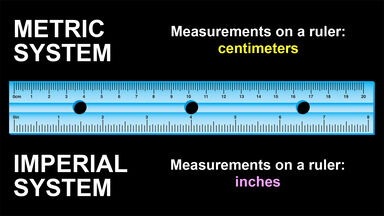 difference between metric and imperial system on ruler
Advertisement

What Is the Metric System?

The metric system is defined as:

“A decimal system of units based on the meter as a unit length, the kilogram as a unit mass, and the second as a unit time.”

Today, it is commonly referred to as SI, which stands for the Système International. It is also known as the International System of Units.

What Is the Imperial System?

The imperial system is defined as:

“A system of measurement in use in the United Kingdom and other Commonwealth countries consisting of units such as the inch, the mile and the pound (a unit of weight).”

The British Imperial System was the official weights and measures system used in Great Britain from 1824 to 1965. The system developed as a way to unite the country by having a single measurement system rather than the many local measurement systems.

The United States Customary System (USCS) was based on the British Imperial System, and many use the term “imperial system,” or IS, to describe both of these systems today.

Why Doesn’t the U.S. Use the Metric System?

When the USCS was created, the metric system was not as widespread as it is today. Since all industries in the U.S. were set up using this measurement system, it would take a lot of time and money for businesses, manufacturing plants, and the country’s infrastructure to change course. Switching an entire country to the metric system can take decades.

While the U.S. doesn’t officially use the metric system, it is widely taught in U.S. schools, and many measurement tools include both IS and SI units. U.S. packaging for commercial products is also mandated to show net quantities in both SI and USCS units.

While the main difference between the metric system and the imperial system is the type of units used, there are a few other key differences.

Is the Metric System Better Than the Imperial System?

You could argue that the metric system is better in today’s world because it is an almost universal standard that is understood no matter where you are. The metric system is also easier to use because of the way all measurements relate to each other. However, if you’re used to using the imperial system, you could argue it is more familiar and therefore easier to use.

If you need to quickly convert metric units to Imperial units, conversion charts are the easiest way.

Here are some common area conversions for metric units and Imperial units:

If you’re measuring length or distance, these are common unit conversions:

When you need to measure liquids, you can use these conversions:

If you’re measuring the weight or mass of something, here are some common unit conversions:

Now that you have a basic understanding of the metric system vs. the Imperial system, you can learn more details about each. Explore metric system prefixes to see how you can easily understand metric units, then discover measurement abbreviations for common measurements.