Maybe you are reading a great pirate book, like Robert Louis Stevenson's classic Treasure Island, or you’re playing Sea of Thieves and are looking for some meanings. Perhaps you're in a play or dressing up like a pirate for Halloween or a costume party, and you want to learn some pirate terms and phrases so you can really get into character. Do you want to pick up some lingo for Talk Like A Pirate Day? Whatever the reason, learning some pirate terms can be useful and fun. Read on, me hearties! 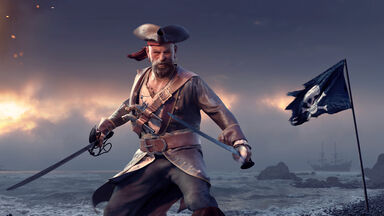 If you think that there are only a few pirate terms and phrases to learn, you are absolutely mistaken! We've provided a vocabulary list of 75 fascinating pirate sayings (although many more pirate idioms abound), and you will see that there is quite a bit more to talking like a pirate than running around saying "Aarrr!"

We have included the pirate phrases, as well as the modern English translation of that phrase.

Need to threaten or insult someone in pirate lingo?

Understand what pirates have to say with popular pirate slang.

Next time you’re aboard a ship, you’ll be able to speak like a pirate.

Of course, no pirate story would be complete without the right words for weapons and treasure.

You might be surprised to already know some of the sayings on this list of old pirate terms. Yes, certain pirate expressions have made their way into everyday life. For example, people still often say "three sheets to the wind" about a drunk person at a party, or they will give something the "heave ho."

For more wordy fun, try learning some great pirate quotes from both real and fictional pirates. Then, explore some fun pirate puns that are sure to shiver your timbers!