Did you know that the tiny tornadoes that stir up dirt on a windy road are called dust devils? Or that ball lightning occurs when lightning appears as an electric sphere? You'll have a new appreciation for weather around the world after learning common, severe and unusual weather terms. 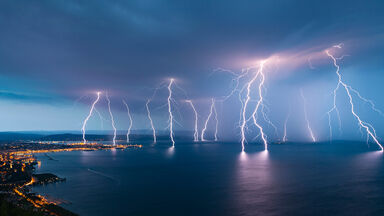 When you watch the weather on TV, the meteorologist might use terms such as high pressure or humidity. These terms are common, but what do they mean? Learn the meanings of these weather terms and how they are used.

No matter where you live, there is a risk of severe weather — and knowing how to describe it can be key to staying safe. See how many severe weather terms you already know and how many you should learn.

You may know what evaporation is, but what's evapotranspiration? And what's the difference between El Niño and La Niña? Add these unusual weather terms to your vocabulary.

The next time you're casually talking about the weather, work these weather terms into your conversation. They're a great way to speak accurately about the weather around you. Keep your meteorology terminology lesson going by looking at types of weather conditions.