What Is the Keystone State?

It can be fun to identify states by their nicknames, but it can be challenging to remember which nickname goes with which state. Are you wondering which state is sometimes referred to as The Keystone State? The answer might surprise you, as will the origin of this nickname as you find out what it means. 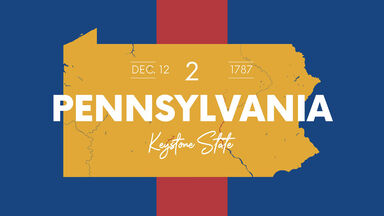 Why Is Pennsylvania Called the Keystone State?

Pennsylvania's nickname is The Keystone State, even though it isn't shaped like a key. The meaning of The Keystone State isn't about shape. Instead, Pennsylvania's nickname is a historically significant reference based on the meaning of the word keystone. This term is defined as the centerpiece of an arch, which serves the purpose of holding the arch together. Pennsylvania is called this nickname because its geographic location was directly in the middle of the 13 colonies, and it played a main role in the formation of America.

Many significant events that led to America's independence from England and evolution as a nation have Pennsylvania roots.

Once the new country was born, Pennsylvania also played a key role in the early development of the United States, not only from a political perspective but also from an economic and societal point of view. For these reasons, it makes sense that the keystone is an official symbol of Pennsylvania's state government.