Which State Is Called The Pine Tree State?

Are you wondering which state is nicknamed The Pine Tree State? Here's a hint: It's one of the northeastern states, and it's almost entirely covered by forests. Pine trees aren't the only type of tree there, but they're very abundant. Keep exploring to discover the answer. 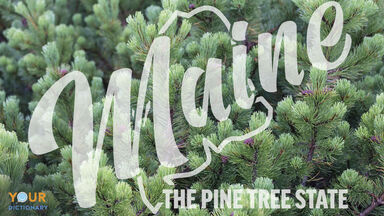 Maine is the state that's often referred to as The Pine Tree State. Why? There's a really good reason! Almost 90 percent of the land in Maine is covered by forests. The exact number is 89.1 percent, according to the United States Department of Agriculture (USDA). That equates to 17.6 million acres of forest in a state that only measures just under 21.3 acres of land. It's hard to visualize what Maine looks like without thinking of trees.

The white pine tree is native to the northeastern region of the United States (New England). Maine is home to some of the largest examples of these trees, which means that the state's forests boast some of the tallest trees on the continent of North America. This fact alone could explain why Maine is called The Pine Tree State, but it's only part of the answer.

The white pine tree's size and beauty are not the only reasons that it is designated as Maine's official tree or is reflected in the state's nickname. These trees have long played a significant role in Maine's economy since long before it became a state; even before the United States of America became a country.

Even with its long-term timber industry, the vast majority of Maine is covered with trees, making the state a popular destination for outdoors enthusiasts. As a result, white pine trees and other trees in the vast forests of Maine further contribute to the state's economy, as well as its unique beauty.

Isn't it interesting to know why the Maine nickname is based on the white pine trees that grow there? Learning this kind of fact about a state definitely provides you with interesting insights. Are you ready to explore the nicknames of other states? You'll find that not every state nickname has the same story. Each one is unique. Since Maine is on the East Coast, start by considering another state that's also located on that coast. You'll be fascinated to unlock the mystery of why Pennsylvania is the Keystone State.