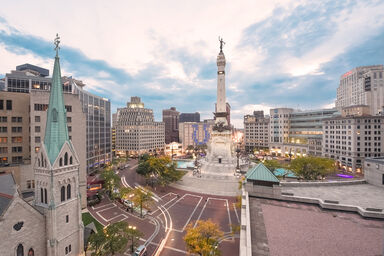 If your only knowledge of the word Hoosier (pronounced HOO-zhure) is from watching college sports, you're probably not a Hoosier yourself. The term for "Indiana resident" came about in the early 19th century and has been in steady use since then. It's even a federal government-approved term — Hoosier is the only non-state-name-based nationality that's recognized by the Government Publishing Office style guide!

As you can see, Hoosier culture is all-inclusive if you were born there or currently live there. But if you're just there to watch the Indy 500 or to tour Purdue University, try not to call yourself a Hoosier just yet.

What Does Hoosier Mean, Anyway?

The absolute, definitive meaning of Hoosier is ... well, here's the thing. No one really knows why people from Indiana are called Hoosiers, and many people can't even agree on what Hoosier means. But there are plenty of theories — and one of them might just be right!

In the 1820s, a few years before the term Hoosier became commonplace in Indiana, a contractor named Samuel Hoosier reportedly hired an entire team of Indiana-based laborers to build canals along the Ohio River. The team was then known as "Hoosier's men," and later, just "Hoosiers." It would be a perfect explanation for Hoosier — if only there was evidence of a Samuel Hoosier ever working on a canal in Indiana.

One popular folk theory for the origin of Hoosier is the greeting of Indiana settlers upon hearing a knock at the door: "Who's yere (who's here)?" Say it fast, and it sounds quite a lot like Hoosier. But this theory doesn't have much traction, since there's not much evidence to support that this greeting was a typical one for Indiana.

Others believe that Hoosier comes from the term "Hoosa men," a term for Indiana flat boatmen who transported corn (supposedly called hoosa in a local native language) throughout the state, making them "hoosa men." However, this theory has largely been debunked, as there is no native language that includes the word hoosa at all.

The word Hoosier sounds sort of French (if you don't really know French). In fact, some believe that the word comes from Houssieres, a French surname. But alas, this theory also doesn't pan out, as the word Houssieres doesn't have a historical connection to the Indiana region.

Does Hoosiers look like the word hushers? A little bit. Supposedly, a husher is a regional term for a fighter so intimidating that he "hushed" all opponents. Is the theory solid enough to make hushers the definitive source word? Nope. There's not much evidence that husher was ever a popular enough term to transition to Hoosier.

Perhaps the most believable theory is based on Indiana's geography. The area was home to a number of English settlers, some of whom came from Cumberland. The word hoozer described anything large — and in the case of Indiana, it could have been used to describe the high hills of Southern Indiana. This theory hasn't been proven ... but it hasn't been disproven either.

Did you know that Johnny Appleseed was a Hoosier? So was Colonel Sanders — and even Garfield the Cat! Every Hoosier worth their salt knows which historical figures and celebrities hailed from Indiana or settled there.

One honorary Hoosier is Abraham Lincoln, who was born in Kentucky but spent his childhood in what's now called Lincoln City, Indiana. His childhood home is still intact and has been preserved as the Lincoln Boyhood National Memorial.

So how do you proceed if you're not a natural-born Hoosier, but you want to blend in when you're living there? Here are the rules of being a Hoosier — and accordingly, the rules of talking to a Hoosier.

Hoosier Is a State of Mind

Whether you're a bread-and-buttered Hoosier or you're a Hoosier at heart, having love for the great state of Indiana is a sign of good taste. Ready to visit another part of the country? Check out: