Why Are New Zealanders Called Kiwis? It's Not About the Fruit

When you hear the word kiwi, three images likely come to mind: a fuzzy brown fruit that’s green on the inside, a hairy, flightless bird, and a person from New Zealand. But only two of those images are actually native to the small island off the coast of Australia — and one is the namesake of the other two. Which is which — and why do we seem to call anything (and anyone) that comes from New Zealand “kiwi”? 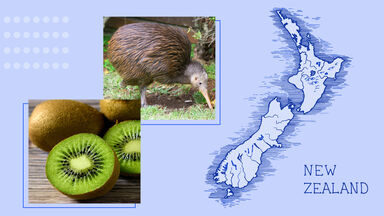 The Bird’s the Word

The original kiwi is the distinctive-looking bird that’s become the national emblem of New Zealand. Named by the Māori people for its “kee-WEE” nature call, the turkey-sized bird became an object of fascination for European explorers. Eventually, it became a national symbol of New Zealand itself.

From Bird to Battlefields

So where does the fruit come in? It came in a boat — all the way from China. Originally known as the Chinese gooseberry (although it’s not related to a gooseberry either), the sweet green fruit we now know as a kiwifruit was brought to New Zealand in 1904. It became popular with soldiers stationed there during World War I and World War II, and Kiwi farmers began cultivating and exporting the fruit to the United States.

Growers renamed it kiwifruit to reflect the country’s national identity, and today, New Zealand exports the most kiwifruit out of any country in the world. So the naming order goes: bird, then people, then fruit (not the other way around).

Is Kiwi an Insult?

It’s always a good idea to check before calling someone by a regional name, but in the case of Kiwi, you’re pretty safe. The nickname’s association with bravery and patriotism makes it a source of pride for most Kiwis, and calling someone from New Zealand a Kiwi is considered a friendly gesture. In fact, the only people who historically haven’t enjoyed the nickname were airmen from World War I — though that had more to do with the flightless nature of the bird than the name itself. (Pilots prefer their birds to fly.)

But Don’t Use It for Australians

So can you use Kiwi to describe people from Australia as well? Nope. Kiwi birds and Kiwis themselves only live in New Zealand, and if there’s one thing that annoys New Zealanders, it’s confusing them with their Australian neighbors. While Australians may not mind being mistaken for Kiwis, you’re better off calling them Aussies or Ozzies, and leaving the Kiwi references back in N.Z.

Notable Kiwis From History (and Today)

The island of New Zealand may not be very big, but its influence certainly is! Kiwis who have made their mark on the world include:

A few honorary Kiwis you’re sure to know: Dwayne “The Rock” Johnson, who spent much of his childhood in New Zealand with his mother’s family, and actor Russell Crowe, who was born in New Zealand but grew up in Australia.

A Land By Any Other Name

New Zealand isn’t the only place with a distinctive nickname for its citizens. For more region-specific names, check out: