Why Is Colorado Nicknamed the Centennial State?

Colorado's official name and its nickname both begin with the letter "c," but that's not why the state is often referred to as the Centennial State. The story behind Colorado's nickname is actually related to when The Territory of Colorado officially became a state. 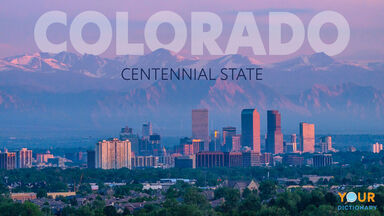 Why Is Colorado Called the Centennial State?

The meaning of Colorado's nickname links to the definition of the word centennial. This word is used to describe the 100th anniversary of an important event. For example, someone who reaches the age of 100 will celebrate a centennial birthday. The year Colorado was recognized as a state marked an important centennial for the United States of America.

Colorado became the 38th state in 1876, which was the 100-year anniversary of the 1776 signing of the Declaration of Independence. This means that Colorado became a state during the 100th anniversary of the year that the United States declared its independence from Britain. That's why the official Colorado nickname is Centennial State. Colorado's statehood was granted almost exactly 100 years from the signing of the Declaration of Independence.

While Centennial State is Colorado's official nickname, it isn't the state's only nickname. Colorado also has a few informal nicknames.

What Does Colorado Mean?

Just like its unofficial nicknames, the state's official name is also related to its unique beauty and majestic scenery. The word Colorado comes from de color rojo, which is Spanish for "colored red." This name was officially used because of the vibrant red color of the soil located near the Colorado River. The name caught on for the entire region, which led to it being designated as The Territory of Colorado in 1861. The name was, of course, retained once the territory became a state.

The Centennial State is certainly a meaningful nickname. It's quite a coincidence that Colorado became a state so close to the exact 100th anniversary of when the Declaration of Independence was signed. Perhaps that is why the state's leaders chose nil sine numine as the official state motto. This Latin phrase, which translates into "nothing without providence" or "nothing without the deity," is certainly fitting to the story of when Colorado became a state and how it got its official nickname.

Do you find the story of Colorado's historic nickname to be interesting? If so, you're sure to be interested in a similar state nickname story that took place much earlier in American history. To learn about another state with a historically significant nickname, discover why Pennsylvania's nickname is the Keystone State.