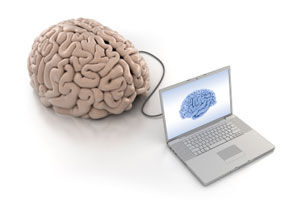 Leetspeak comes from the concurrent, though usually independent, efforts of online gamers, hackers, and pirates to sidestep spiders and bots. Software searches unfathomable amounts of text in infinitesimal mounts of time. Back when the internet was primarily text and low-resolution graphics, if you didn't want government robots or search engines knowing what you were talking about, you had to use leetspeak.

Operating under the assumption that computers record better than they perceive, users adopted a way of writing that exploited the machines' weakness. Humans connect dots much better than machines do. They figure out acronyms, correct mistakes, and can even look at numbers and symbols as letters. What might look like garbled waste to a machine can look like a perfectly intelligible message to a human being.

Now that Google and everyone else knows what w4r32 and s3ri4l2 are, the jig is up. These days, everyone who leetspeak was supposed to fool is onto the game. It's currently an argot shared by tech-savvy friends as a joke or by griefers (gamers who like to ruin other gamers' fun) and geeks who want to frustrate "nubes" (newbies). Every once in a while you might come across a website written entirely in leet, but the only person it might be fooling is the author's 50-year-old father, and even that's a long shot. Most people can figure it out, and the machines that used to find it difficult find it a lot less difficult these days.

That's not to say that it isn't good crack to pepper your online idiolect with a few choice leetisms. If you're talking about hackers, you can write "h4x0rs." If you want to write your special someone a note that's just a little different from all the others, try "1 l0\/3 y0u." The idea is to use as many symbols and numbers in place of letters as you can. There are a few basic rules, like "I" is usually "1," and "A" is usually "4," but unless you're trying to pass as a real h4x0r, don't sweat it too much. 4n¥0n3 ©4n h4v3 ƒun wi7h l€€t.

The Human Brain as Leetspeak Translator

The human brain likes to figure out patterns and make sense of them, which is probably the real reason why leetspeak is still around despite its usefulness having perished long ago. The brain is a great encoder and decoder, and it relishes its ability.

If you don't have a good brain, or you just want to save time and cheat a little, there are many online leetspeak translators and generators. If you're looking for secrecy, though, you might want to try Klingon.