French Canadian consists of quite a few components, and several languages fall under this term. Quebecois (Quebec French), Acadian French, Metis French and Newfoundland French are all part of the general category of French Canadian. Furthermore, French Canadians often refer to a people too, and not just a language. These French Canadians sometimes tend to also speak Canadian English, which is similar to British English, or American English. 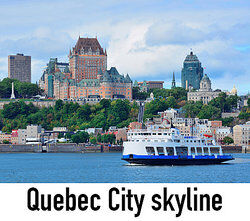 view of a boat and Quebec City

The province of Quebec is the heart of French Canada, and about six million of its residents speak native French, and only about one million of them are English speaking. Throughout the rest of Canada, you will only find about one million French speaking Canadians. Therefore, the language is clearly quite concentrated!

Here's a list of some words and phrases translated from French Canadian to English. You'll find these handy when traveling through cities like Montreal and Quebec City.

Just as English is filled with all sorts of idioms, the same is true with French Canadian. Here are just a few examples of phrases, idioms, and expressions.

Of course, we cannot translate words from English to French Canadian indefinitely. Chances are, you are looking for a specific word. Therefore, we will provide the tools that you need to do some translation of specific words.

Finding translators for French Canadian is much more difficult than finding them for other languages. Therefore, lists of already translated words need to be included here as well.

The best translator is a person or a book because the internet and other electronic translators are not always reliable when translating more than a single word. They cannot understand the context in which you are speaking.

The good news is that while French Canadian certainly has its nuances and is distinct from Parisian French, you'll find that most common French words and phrases hold true across the different variations and dialects. If you've ever enjoyed an apéritif in the foyer or purchased a souvenir at a boutique, you've already had a brush with the French language. It just takes practice and immersion to learn more.